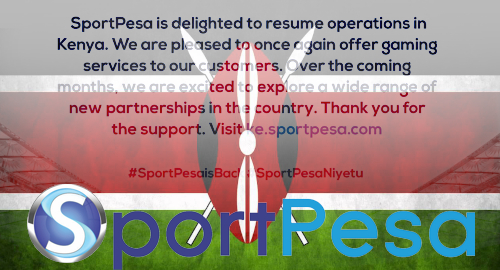 Kenyan sports betting operator SportPesa has resumed operations in its home market after over a year of warring with the government over taxes.

On Friday, SportPesa announced its triumphant return to the Kenyan betting market, saying it was “delighted” to be once again serving local punters. The brand exited the market in September 2019 following a lengthy tax dispute with the Kenya Revenue Agency (KRA) based on different definitions of what qualified as ‘winnings.’

SportPesa’s return is a little more complicated than it may seem, as the company has transferred the rights to the SportPesa brand to a new locally licensed bookmaker, Milestone Games Ltd, and a new website, ke.SportPesa.com. The new betting app is reportedly suffering some teething problems and customers have been advised to stick to the website for the time being.

SportPesa Kenya’s official Twitter feed has informed bettors that it they previously held a SportPesa account, their log-in details remain the same and all they need to do to reactivate their account was to read and accept the updated T&C’s.

Customers who opted against withdrawing the funds in their old accounts last year will find the funds waiting for them on the new site. Punters who need to re-deposit have been instructed that the site has received a new M-Pesa paybill number (as the original number was revoked by Safaricom last year under government pressure).

Until it shut its local offices last October, SportPesa had been Kenya’s unquestioned betting market leader. But in mid-2019, the Betting Control & Licensing Board (BCLB) suspended the licenses of SportPesa, Betin and dozens of other operators due to KRA’s assertion that they owed hundreds of millions of dollars in back taxes.

The tax dispute centered on the KRA’s belief that a 20% tax on bettors’ winnings applied to the whole sum paid out, including the original betting stake. Operators claimed this was a tax on betting turnover, not winnings, and refused to deduct this sum before paying its customers.

In July, Kenya approved new legislation that eliminated the turnover tax, but the government almost immediately vowed to reimpose the tax within six months. It’s unclear why SportPesa would be so eager to return to the market with this issue apparently no closer to being resolved.

Little is known about SportPesa’s new Kenyan partner. Last September, the BCLB announced that the company (and other suspended licensees) would need to “apply afresh for a license” before it would be welcomed back. SportPesa boss Ronald Karauri tweeted Thursday that he looked forward to “working closely with BCLB and all other stakeholders.”

Karauri added that SportPesa planned to “explore a wide range of partnerships in Kenya over the coming weeks and months.” Prior to its market exit, SportPesa was the leading sponsor of local sports bodies and its betting rivals were quick to snap up some major football sponsorship deals in SportPesa’s absence.

Karauri told local media outlet Tuko that he was most keen on renewing ties with SportPesa’s longtime partners Gor Mahia and AFC Leopards, despite the teams having signed deals with rival Betsafe this June. Karauri said he would “still talk to [the teams] even if they have new sponsors.”