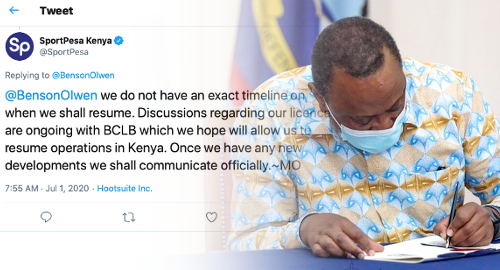 On Tuesday, Kenyan President Uhuru Kenyatta signed his government’s new Finance Bill 2020, which eliminated the 20% betting turnover tax that caused many of Kenya’s leading operators, including SportPesa, to quit the market last year.

SportPesa was one of a couple dozen operators whose licenses were suspended last summer due to the government taking the dubious position that the 20% winnings tax applied to all sums paid out to punters, including their original stake. The government’s interpretation left operators liable for hundreds of millions of dollars in unpaid taxes, forcing companies like SportPesa and Betin to shut their local operations.

SportPesa reportedly held a nearly two-thirds share of Kenya’s betting market before its September 2019 exit, while Betin held a roughly 20% stake. Betika, which previously ranked third in terms of market share, remained in Kenya after agreeing to pay the controversial turnover tax, and has subsequently emerged as the new market leader.

SportPesa previously promised to resume its Kenyan operations if the government reverted to “adequate taxation and non-hostile regulatory environment.” On June 23, its official Kenyan-facing Twitter feed claimed that the company was “waiting to get the license from [Betting Control & Licensing Board] that will allow us to resume our operations in Kenya.”

On Wednesday, SportPesa Kenya said it still didn’t have “an exact timeline” for its return but said discussions with the BCLB “are ongoing” and it would update former customers once it had something definitive to report.

Kenyan media quoted Interior Cabinet Secretary Fred Matiang’i saying Tuesday that none of the betting operators whose licenses were suspended last summer had so far “complied with the registration criteria” for reinstatement of their licenses. Matiang’i said “some of those firms … will never operate in Kenya because they have not met the set standards.”