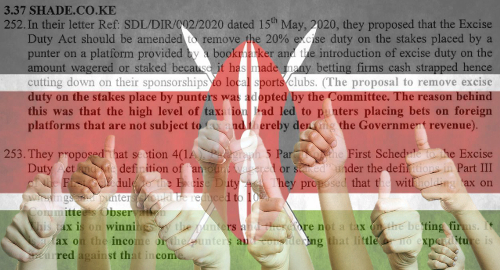 Kenya’s parliament has scrapped the controversial tax on sports betting turnover, although it remains to be seen whether President Uhuru Kenyatta is on board with this plan.

On Tuesday, Kenya’s National Assembly approved the Finance Bill 2020, which governs how the government will finance its operations in the fiscal year starting July 1. Among the bill’s features is the elimination of the controversial excise tax on betting that turned the country’s wagering market upside down over the past year.

Last summer, Kenya’s Betting Control & Licensing Board (BCLB) suspended the licenses of a couple dozen gambling operators, including market-leaders SportPesa and Betin, over claims that the operators owed the government hundreds of millions of dollars in unpaid taxes.

The source of the friction was the government’s view that a 20% tax on bettors’ winnings that was suspended in 2016 then reintroduced in 2018 applied to the total sum bookmakers paid to winners, i.e. including the original betting stake, making it a 20% tax on turnover.  SportPesa, Betin and other operators ultimately shut their Kenyan operations rather than pay the disputed arrears.

The tax was originally slated to remain in the 2020 Bill but the Finance and National Planning Committee agreed to its removal following a request by an entity identified in the Committee’s notes as ‘Shade.co.ke,’ about which absolutely nothing can be learned online.

The Committee agreed to scrap the tax in part because the betting operators’ withdrawal from the market had resulted in hundreds of Kenyans losing their jobs. The government also lost out on tax revenue because Kenyan bettors had switched to internationally licensed betting sites that pay no Kenyan tax whatsoever.

The Committee was also asked to reduce a 20% tax on bettors’ winnings – their actual winnings, not the stakes –  to 10%, but the Committee found that this wouldn’t negatively impact betting operators and that these winnings involved “little or no expenditure” on behalf of the bettor.

SportPesa has yet to comment on the Assembly’s actions, likely waiting to see what President Kenyatta does when the Bill arrives on his desk. Last August, Kenyatta expressed disdain for the whole gambling industry, saying he was willing to ban the activity altogether if the Assembly were to send him such a bill. Last November, a government-commissioned report recommended eliminating private gambling operators in favor of a state-run monopoly.