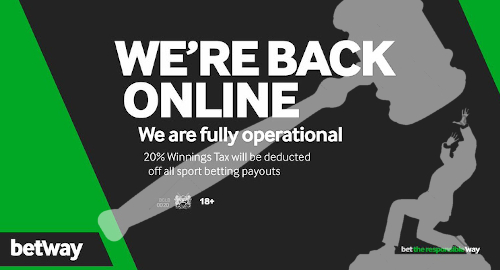 Online sports betting operator Betway has been hit with a nearly $1.5m back-tax judgment by a Kenyan tribunal, in yet another blow to the country’s struggling gaming sector.

On Wednesday, Kenyan media reported that a Tax Appeals Tribunal had ordered Betway to pay the Kenya Revenue Authority (KRA) a total of KSH158m (US$1.46m), the vast majority of which was due to outstanding withholding tax on Betway punters’ sports betting winnings.

Betway was one of dozens of Kenyan-facing betting operators that had their local licenses suspended in July 2019 due to the KRA’s claim that they owed hundreds of millions of dollars in back taxes. The KRA based its claim on a disputed definition of how to apply a 20% tax on punters’ winnings, with the KRA claiming the tax applied not just to winnings but also to a punter’s original stake.

While market-leading operators SportPesa and Betin opted to shut their Kenyan-facing operations rather than accede to the KRA’s demands, Betway’s license was reinstated in August 2019 after it agreed to apply the new tax in line with the KRA’s definition.

But the KRA apparently wasn’t done with Betway.  KRA legal eagle Paul Matuku said the tribunal reached the conclusion that Betway had computed its tax obligation contrary to the wording of the 2016 legislation that clarified the withholding tax definition.

Kenya’s betting market has been in turmoil ever since the government decided to squeeze it for every penny it could. The fever appeared to have broken this summer when President Uhuru Kenyatta signed the Finance Bill 2020, which eliminated the 20% turnover tax. But just days later, the nation’s treasury secretary said the government would reimpose the tax within six months.

Despite the ongoing uncertainty, the market leaders’ withdrawal convinced other operators that it might be worth attempting to fill the void. August saw Curacao-licensed operator Melbet launch a Kenyan-facing site, while Triple5Bet received permission to launch from Kenya’s Betting Control and Licensing Board (BCLB).

SportPesa’s official social media accounts continue to insist that the company is negotiating with the BCLB regarding the reinstatement of its local license but the company been saying this for over a year now. SportPesa’s former market-leading status means its alleged back tax obligation accounted for the bulk of the hundreds of millions the KRA sought to collect from the betting sector.

Further complicating matters is an investigative report earlier this month that claimed SportPesa had dodged other Kenyan tax obligations through its corporate structure, which dramatically lowered Kenyan profits by shifting them to a UK subsidiary. The report further claimed that SportPesa was simultaneously reducing its UK taxes thanks to a ‘double taxation’ treaty between Kenya and the UK.

While SportPesa denied any illegality in the dealings between its various subsidiaries, the suggestion of tax avoidance well beyond the punters’ winnings issue likely won’t favor the company’s negotiations with the BCLB.