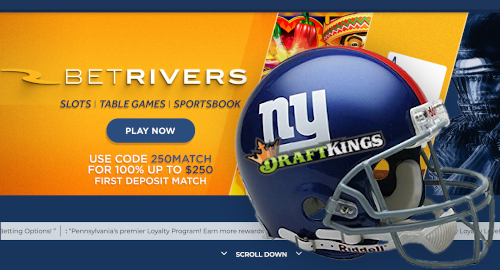 DraftKings will also open “a first of its kind virtual SportsLounge” – whatever that is – on Giants game days, while the parties will team up to offer Giants fans access to a weekly free-play Pick ‘Em game.

New York has yet to authorize online betting but does permit retail betting at upstate gambling venues, including the del Lago Resort & Casino, at which DraftKings opened a retail sportsbook one year ago.

The Giants deal comes just one day after DraftKings’ rival FOX Bet inked an official partnership with the Giants’ archrivals, the Philadelphia Eagles. Expect a flurry of similar announcements to follow in the days and weeks to come as operators strive to put their brand front and center in the hearts and minds of football bettors.

DraftKings launched its mobile betting product in the state of Illinois in early August through its deal with the DraftKings at Casino Queen in East St. Louis. It will be another month or so before we learn how well the app is faring against its competition, which grows more numerous by the day.

On Wednesday, the Illinois Gaming Board (IGB) issued its sports betting revenue stats for the month of July, during which only one operator – Rush Street Gaming’s BetRivers brand – was offering digital wagering.

The IGB’s stats show total betting handle of $52.5m in July, of which $48.5m was wagered online with BetRivers. The brand’s retail partner, Rivers Casino Des Plaines, also handled most of the land-based wagering, with the Argosy Casino Alton accounting for only around $600k.

There’s no love lost between DraftKings and Rush Street, based on the former’s belief that the latter firm was and is actively trying to hobble online-only betting operators such as DraftKings. The enmity dates back over a year to before Illinois finalized its online betting legislation, which ultimately contained elements that DraftKings viewed as anti-competitive.