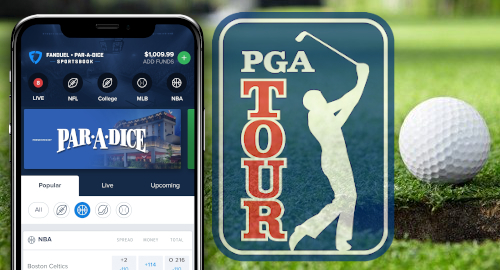 Sports betting operator FanDuel has finally gone live in Illinois while signing a new gaming partnership with the PGA TOUR.

Last Friday, FanDuel officially launched its FanDuel Par-A-Dice Sportsbook app in Illinois, co-branded with the name of its Par-A-Dice casino partner in East Peoria, which is part of the Boyd Gaming family of land-based gaming venues.

While FanDuel had received a temporary betting permit from the Illinois Gaming Board (IGB) in July, Boyd didn’t submit its final paperwork until August 19. Given the IGB’s previous timetables, it appeared that FanDuel might not receive its ‘go live’ approval until a few days before the new NFL season kicks off on September 10.

Perhaps the IGB is simply getting better at an unfamiliar task, because FanDuel’s app has now joined rival DraftKings and Rush Street Gaming’s BetRivers app in accepting online wagers in Illinois. Bettors can even sign up online, at least until September 19, by which point Gov. J.B. Pritzker may flip-flop yet again on that score.

For the record, the Par in Par-A-Dice isn’t a golf reference, but that didn’t stop FanDuel from signing on as the latest Official Betting Operator of the PGA TOUR. The multi-year ‘content and marketing relationship,’ which was announced Monday, follows in the footsteps of DraftKings and BetMGM (the joint venture of MGM Resorts and GVC Holdings).

FanDuel Sportsbook will enjoy the usual perks, including access to TOUR trademarks, advertising in official TOUR media along with content and video rights, while the two will collaborate on ‘odds-based content’ to fans via TOUR digital platforms.

The announcement noted that golf is responsible for the highest single event handle on FanDuel over nine of the last 12 Sundays, which, it should be noted, weren’t exactly packed with the usual pantheon of sporting events due to COVID-19. Nevertheless, golf betting handle at FanDuel’s New Jersey betting operation has already surpassed 2019’s total golf handle, despite the pandemic taking 13 weeks off the 2020 schedule.