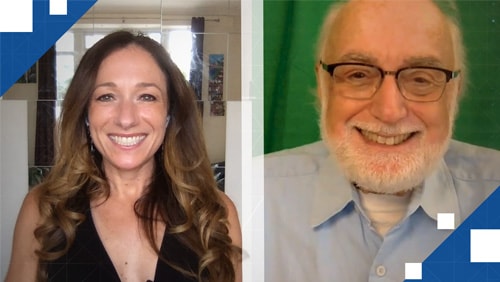 Innovating and disrupting existing industries isn’t just about lucking into the next big thing. As it turns out, doing so in a reliable way requires a specific mindset. Dr. Dr. Samuel H. Liggero, Professor at the Tufts Gordon Institute has a long history of finding the next cool thing, and one of those cool things was definitely his daughter, CalvinAyre.com’s own Becky Liggero Fontana. They spoke about the ever-evolving world of technology for this week’s episode of The Long Con.

Dr. Liggero shared how he got started in Research and Development (R&D) for a seriously innovative company back in the day. “I started at Polaroid in 1970 and I remained there until 2002, so I had a wonderful 32-year career there,” he said. “I joined right after finishing my education, I had postdoc’d at Princeton and went right to Polaroid. My first assignment there was Senior Laboratory Supervisor where I supervised half a dozen people. My last assignment, for the last seven years at Polaroid, i was a Corporate Vice President and Program Fellow, Where I was responsible for R&D with a group of several hundred scientists, engineers and technicians. And in-between those bookcases if you will, those bookends, I had many, many assignments that ranged from research group leader, to plant manager, to technical marketing director, to education and training director, to applications director and so on.

Polaroid wasn’t just a company that lucked into new technology; they drove toward it. “What attracted me to Polaroid was something called PP101, Personnel Policy 101, it really resonated with me there were two features to it,” he said. “The first is for the company to make products of genuine usefulness to society, and add a profit to the company. And the second, so very important, was to create a working environment where people could realize their full potential, oh did that resonate with me then and it still does today.”

As Dr. Liggero relates, Polaroid was the Apple of its time. Edwin H. Land, founder of the company, was a rolemodel for Steve Jobs, and he related the theory that innovation is about teaching the customer what they want, not reacting to demands.

Dr. Liggero shared the secret formula for discovering the next big thing, or preparing your company to react to it. “Basically two things have to happen they say for disruptive innovation to take place,” he said. “First, you have to create a new market, and second, if not a new market, you have to come up with products or services that are easier to use or less expensive. Now in the case of Polaroid, and for that matter Kodak I might add and other photographic film companies, digital was not new, but digital was in fact in many instances less expensive, in some instances easier to use, so therefore it was able to take a foothold into the silver halide based market, a foothold, limited niche applications. And that’s the way disruption often happens; it doesn’t go after the mainline product with rare exceptions, Tesla being an example, but typically a disruptor comes in at the periphery of your market and then, if you as the incumbent, the person or the company that has a major market share do nothing about it, over time that startup that, incumbent, that upstart could start to eat away into your market share until eventually, they can compete effectively with you.”

Unfortunately, Polaroid eventually failed because it was wedded to a business model that worked well in the past, which was the Razer model of sales: selling cameras cheap to make a huge profit on film. But that business model couldn’t adapt to the digital age. Although they had investments in digital cameras, the business model didn’t suit the product.

Dr. Liggero now spends most of his time teaching and he spoke at length about how educators must learn the best practices for teaching students remotely. He also he urged our readers to visit Tufts Gordon Institute to see what they have to offer. “I encourage … your readers to go to the school and institute we have a beautiful web page that describes a lot of things that we do,” he said. “We offer multiple programs for undergraduates and graduate students.”

Although he’s been focused on innovation for more than 50 years, Dr. Liggero noted that focusing on what’s new is a never-ending effort. “It’s a mindset, number one, it’s a discipline you know, like anything, but you know you’re an athlete and you work out a lot each day and you don’t miss a day, come rain or shine, and so are you because it’s a discipline because it’s something that constitutes value for you.”

Dr. Liggero also reflected on how the world has seemingly turned crueler over the decades, and expressed his wishes that policy makers and those in power could show more caring for the world around them in upcoming days. Watch the entire interview to see those thoughts, and don’t forget to subscribe to the CalvinAyre.com YouTube channel to see all of our new videos as they go up.