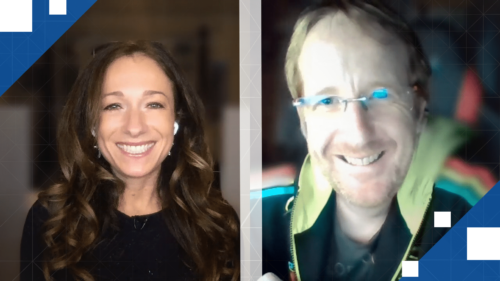 The gambling industry talks a lot about innovation, but many of the biggest changes we see come from other industries. Automation is going to play a huge role in our future, and to understand how we can embrace that change, our Becky Liggero Fontana sat down with Andy McCartney, co-founder of Whitespace for this week’s episode of The Long Con.

The two discussed how McCartney made his way to where he is now, and what Whitespace’s purpose is. “The reason it’s called Whitespace is a very simple term, it means the unattainable, because we’re constantly looking to find the right answer to solve some of the big problems with some of the biggest companies,” he said.

But if you’re simply focused on innovation, you’re missing where the biggest advances are coming, McCartney said. “Bigger question now is actually collaboration, because large companies no longer can solve problems themselves in the time scales required,” he said. “So a good example would be, outside of the gambling industry, if we took something like autonomous vehicles, that is now an IoT (Internet of Things) effectively on wheels, so it’s no longer a car, so now you have to work with a data company, you have to work with an ISP, you have to then work with an energy company. Suddenly, something that 10 years ago was just about building a car now requires five or six companies all working together to solve.

The gambling industry might be familiar with McCartney’s brother, Dr. Glenn McCartney. The siblings co-published “Rise of the machines: towards a conceptual service-robot research framework for the hospitality and tourism industry” in October, 2020. “The paper is all about effectively automating a human interaction through a machine methodology,” Andy McCartney said. “So that that could be as complex as a full autonomous robot, but could be as simple as an info pad, effectively.”

There are already examples of this in the hospitality sector. “I was in Berlin, I checked in at the bar,” he shared. “There was nobody there whatsoever, I went on to the tablet device, I checked in, it printed my key card, I went up to my room there was a complimentary Apple device, and that became my interaction with the hotel, the whole of the stay. The only time I talked to actually anybody was to order a drink, and to be honest that was more for the human interaction.”

But it’s not a solution for everything. We still expect human interaction at the restaurant and the bar, but automation could replace the more mundane tasks of checking in and ordering room service, as an example. It won’t be a threat to as many jobs as people think.

But that doesn’t mean it won’t dramatically change things. “If you’re a company and you’re not preparing yourself to reskill your staff to complement technology, it’s not really technology’s fault,” he added.”

Many have speculated about the worst-case scenarios automation could bring to the economy. McCartney is optimistic, looking to history for examples. “I think it will change jobs,” he said. “People said Uber was destroying the taxi industry, but if you think about it really, the taxi industry destroyed the horse and cart industry. You know, somewhere along the line a horse had to take a carriage 100 miles, that meant there was an innkeeper, somebody looking after the horse, there was a shoe, there was probably five people in the chain that took that thing. A taxi comes about and suddenly five people no longer. But uber actually give people jobs.”

In the whole interview, McCartney discussed further changes that will come from automation and innovation, as well as his thoughts on the year of Covid-19. Subscribe to the CalvinAyre.com YouTube channel to see every episode of The Long Con as soon as it published, or subscribe on Google, Apple Podcasts, and Spotify for the podcast versions.