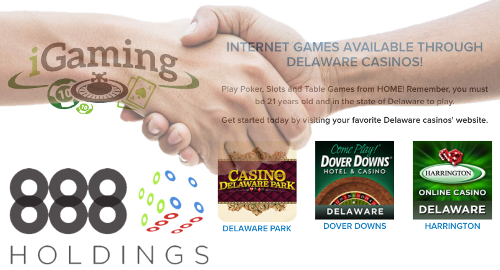 On Monday, 888 announced that it had extended its online technology deal with the Delaware Lottery by another two years. The parties have been joined at the hip since 2013, the year the state launched its online gambling market via the state’s three ‘racino’ operators – Delaware Park, Dover Downs and Harrington Raceway.

Delaware’s online offering hasn’t enjoyed the success reported by states with more competitive markets such as New Jersey and Pennsylvania, which have been setting new records during the COVID-19 lockdown. Delaware’s iGaming revenue hit a mere $1.13m in May, and while that was more than triple the sum the market reported in February, it’s still nowhere close to being proportionate to those other states based on population counts.

Whatever the criticisms directed at Delaware’s homogenous offering, 888 continues to impress investors back home. Having bottomed out at 70.7p back in mid-March, 888’s shares topped 176p last week, in part due to the release of a trading update in which the company predicted its FY20 adjusted earnings would come in “significantly ahead” of prior forecasts.

In March, 888 reported that its surging online casino and poker verticals were more than offsetting COVID-19 struggles in its much smaller sports betting business during the first quarter of 2020. Late last month, 888 reported that average daily revenue for the year-to-date was up 34% from the same period last year.

888 CEO Itai Pazner said the company had enjoyed “a particularly encouraging performance in poker” as casinos around the globe shut down, leaving players no choice but to seek out online alternatives. Pazner also claimed that 888’s poker progress was in part due to the company creating “a safe and entertaining destination” for recreational players.

As for that struggling sports vertical, Pazner said bettors’ reaction to the ongoing resumption of major league play had been “better than expected” and June’s sports revenue run-rate was “ahead of June 2019.”

888’s release made no mention whatsoever of its dominant online casino vertical, likely reflecting concerns that the current view of online slots among UK media and politicians is only slightly less hostile than how Donald Trump might be greeted at an NAACP rally.