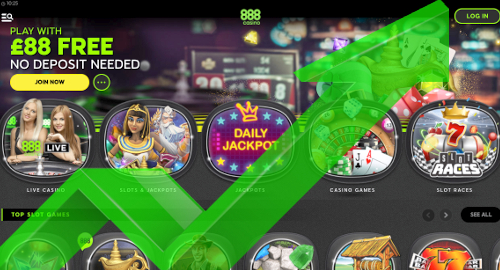 Online gambling operator 888 Holdings saw its shares jump by nearly one-third after announcing that its casino and poker products appeared to be enjoying a coronavirus-related spike.

On Monday, the UK-listed 888 announced that it would delay the release of its preliminary 2019 financial results based on a request from the Financial Conduct Authority. On Tuesday, 888 released a ‘COVID-19 Trading Update’ that offered a rosy snapshot of its performance in the year-to-date.

888 said the strong momentum it enjoyed at the close of 2019 had continued into the current year, with trading through March 18 up 18% from the comparable prior year period. While the company said its casino and sports verticals were both up around 24% year-on-year, it noted that the recent cancellations of major sporting events would negatively impact betting revenue going forward. Sports accounted for 16% of 888’s 2019 revenue.

888 added that it was seeing “evidence of increased customer activity” in its casino and poker verticals “that might, in part, compensate for the sports betting disruption for a period of time.” However, the company noted that “a prolonged period of global macro-economic uncertainty” caused by the coronavirus pandemic could negatively impact customer spending in the non-betting verticals.

UK parliamentarians and local media have become increasingly vocal about the dangers of gambling operators steering bored sports bettors toward ‘riskier’ products. 888 said Tuesday that its “vigilance on safe gambling and preventing gambling-related harm is even more important than ever” and it is “proactively communicating” with customers regarding tools to limit and control their activity.

Investors liked what they heard, pushing 888’s shares up nearly 32% by the close of Tuesday’s trading. Gains were also enjoyed by 888’s UK-listed rivals, including Flutter Entertainment (+11.6%), GVC Holdings (+23.7%) and William Hill (+34.1%), as some of the panic that gripped the markets last week appears to have abated … for the time being, at least.

IRISH HORSES, UK GREYHOUNDS TOLD TO STAND DOWN
As if on cue, UK bookmakers learned late Tuesday that Ireland has suspended racing meets until at least April 19 after Taoiseach Leo Varadakar announced the cancellation of all sporting events effective at midnight. Racing had been operating on a ‘behind closed doors’ basis since March 13 but the government viewed this activity as still too risky in terms of limiting COVID-19 spread.

Ireland’s announcement came just one day after the UK suspended all greyhound racing activity for three weeks. Like Irish racing, the Greyhound Board of Great Britain had been running its dogs behind closed doors since this weekend but has now shut its operations to comply with the UK government’s closure of non-essential businesses.