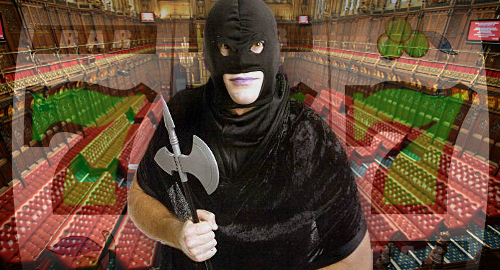 UK gambling operators have been dragged back to the woodshed by yet another government report equating their existence with virtually everything wrong on this planet.

The Time for Action report by the House of Lords Select Committee on the Social and Economic Impact of the Gambling Industry recommends sweeping changes to the local gambling sector, all of which the committee claims “are urgent if consumers are to be protected and lives saved.”

Committee chair Lord Grade of Yarmouth said that while most gamblers “enjoy it safely,” gambling has “made the lives of two million people miserable.” The 66 recommendations in the report aim to replace “lax regulation” with “a more robust and focused regime which prioritizes the welfare of gamblers ahead of industry profits.”

Before we go any further, the (lower-case-R) republican in us feels the need to point out that the House of Lords is an unelected body largely consisting of party bagmen and campaign contributors who never have to justify their decisions to an electorate with the power to remove them from their plum posts. And with that out of the way, let’s crack the cover.

Among the committee’s recommendations is a ban on operators promoting their brands “on the shirts of sports teams or any other visible part of their kit,” along with prohibiting gambling ads “in or near any sports grounds or sports venues.”

The committee magnanimously offers to delay imposition of these restrictions “for clubs below the Premier League before 2023.” The delay is intended to give smaller clubs time to “adapt to the new situation” and secure “alternative sources of sponsorship.”

Tellingly, the restrictions imposed on football and other sports wouldn’t apply at all to horseracing, in part due to the “extensive gaps between races, which does not allow for customers to be constantly placing bets.” That, or it’s simply a reflection of the number of Lords who own and/or breed horses.

Getting back to the non-racing ban-hammer, the Lords want a blanket prohibition on ‘bet to view’ inducement, aka making the viewing of sports matches conditional on having an online betting account or placing a wager with the operator streaming the match.

Sports bodies would be prohibited from selling such rights to betting operators, although the Lords noted that they could only hope leagues would “see the wisdom” of not selling those rights to internationally licensed bookmakers.

Third-party marketing affiliates would be required to hold licenses issued by the UK Gambling Commission (UKGC), and UK-licensed gambling operators would be prohibited from striking deals with affiliates not bearing the UKGC seal of approval.

Other marketing no-no’s would be any ad that offers “inducements to people to start or to continue gambling, or which create a sense of urgency about placing bets.” Operators would also be banned from issuing any communications offering inducements to bets, unless the recipients are members of an operator’s VIP scheme.

ONLINE, OFFLINE, OUT OF LINE

The committee wants to establish a system to judge new gaming products against “a series of harm indicators,” including their perceived addictiveness and whether or not they appeal to children. Any game that scored too highly on this scale wouldn’t be approved.

There should also be a category system for online products that would dictate each game’s stake limits. The committee wants to achieve “the equalization of speed of play and spin, so that no game can be played quicker online than in a casino, betting shop or bingo hall.”

Games, whether online or offline, should be required to “prominently and clearly” display their ‘house edge.’ The committee also wants the government to reinstate the triennial reviews of maximum stake and prize limits for both online and offline products, with the first of these reviews to have conclusions ready by “the middle of 2021.”

Loot boxes in video games should be immediately designated as gambling products, “without waiting for the government’s wider review of the Gambling Act.”

The committee largely echoes the recommendations made in the UKGC’s recent consultation on VIP programs, including limiting participation to gamblers over 25, ensuring program managers don’t profit from VIP spending/losses, and conducting checks on affordability and source of funds.

The government should establish a system by which operators can share customer information, and if the result of an affordability check “throws doubt on whether an individual can safely gamble at the rate they have been doing,” operators would be required to share this info with all other UKGC licensees, who would be “bound by it in the same way.”

Controversially, the committee wants the government to more accurately track “the prevalence of suicidal tendencies linked to gambling.” Doctors should be required to inform coroners if they suspect that “a death by self-harm was gambling-related” and coroners would periodically forward these records to the Ministry of Justice.

As for the UKGC’s role in all this, the Lords committee struck a slightly more diplomatic tone than the House of Commons Public Accounts Committee, which recently called the regulator “toothless” and in bad need of “a radical overhaul.”

That said, the Lords believe the regulator’s current enforcement efforts “do not make a sufficient impact on large corporations.” Fines and penalties “should reflect not just the seriousness of the offence but the size of the offender.” The UKGC should also demonstrate “much greater willingness” to revoke the licenses of repeat offenders.

The Lords want to set up an independent Gambling Ombudsman Service to settle disputes between operators and customers. Membership of this service would be a condition of receiving a UKGC license.

UKGC CEO Neil McArthur issued a response to the Lords report, saying criticism was “something that all regulators face.” McArthur added that “where the criticisms are justified we will learn from them,” but noted that “this and other recent reports are playing back issues we have raised, know we need to work on and are already working to improve.”

The Betting & Gaming Council industry association issued a statement saying that, while it didn’t agree with every recommendation, it agreed with the Lords that “the challenge for the government and the industry is to make gambling safer for all, but no less enjoyable for those who do participate safely.”