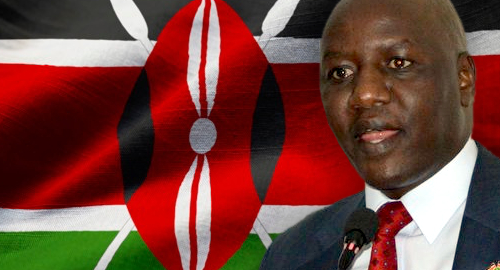 Yatani appeared to suggest that President Kenyatta was unaware that the betting tax had been eliminated from the Bill when he affixed his signature, claiming that “the removal of this tax happened during the Committee stage of the Bill.” On Friday, local media reported that National Assembly Finance Committee chair Joseph Limo (pictured) had lost his chairmanship as result of the controversy.

Interior Secretary Fred Matiang’i reiterated the government’s position Friday, saying the government was “not going back on the decisions we took on betting and gambling.” Matiang’i said President Kenyatta “is firm on this matter and we have his word to streamline this sector.”

Matiang’i also took aim at the Betting Control & Licensing Board (BCLB), saying “the problem” with Kenya’s gambling sector “was at the licensing unit.” Matiang’i claimed the government was “not going to allow someone to register crooks from Eastern Europe to come and destroy our families and young people again.”

Matiang’i appears to be referencing Guerassim Nikolov, the Bulgarian national who founded SportPesa, which until its withdrawal from Kenya last year was the country’s dominant betting operator. Gene Grand, an American-Bulgarian, also held a 21% stake in SportPesa.

However, The Nation reported this week that Grand appears to have transferred his stake in SportPesa to a Delaware-incorporated firm, Naogen Investment Inc, following SportPesa’s withdrawal from the Kenyan market last September. Little is known about Naogen, which now has 21% stakes in SportPesa’s Kenyan and Isle of Man offshoots, and a 33% stake in its UK holding company.

Eyebrows were raised this week when it was revealed that Peter Kihanya Muiruri, a cousin of President Kenyatta, had small stakes in three SportPesa companies, including Kenyan-based parent Pevans East Africa.

SportPesa’s official Kenyan-facing Twitter feed continues to tell its former customers that the company remains in discussions with the BCLB regarding the potential resumption of its operations in the country.