Home / Casino / US casinos enjoyed record revenue of $43.6b in 2019’s pre-pandemic paradise 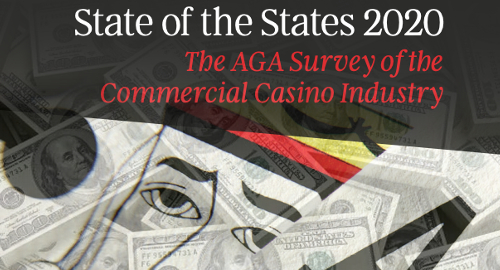 The US casino industry reported its fifth straight year of annual revenue growth in 2019, a streak that is all but certain to end when the pandemic-plagued 2020 figures are released this time next year.

On Thursday, the American Gaming Association released its annual State of the States report, detailing the US commercial casino sector’s performance in 2019. Last year saw gaming revenue top $43.6b, a 3.7% rise over 2018’s figure, the fifth consecutive year of annual growth and a new record high.

The US gaming industry “has never faced a bigger challenge” but Miller maintains that the sector has bounced back before, as it did after the 2008 global economic meltdown, and expressed confidence that its resilience will see it through this current crisis.

Getting back to 2019, the industry welcomed Arkansas as the 25th state to report a full year of legal commercial casino gaming, while the number of states that had approved legal sports betting hit 20 (plus the District of Columbia), up from 14 at the end of 2018.

Of those 20 states, only 14 had their legal betting markets up and running in 2019, but that was six more than at the start of the year. Sports betting revenue totaled $909m last year, more than twice 2018’s total, while bettors wagered over $13b with US-licensed operators.

The above statistics don’t include contributions from 524 tribal gaming operations in 29 states, which generated a record $33.7b in 2018.