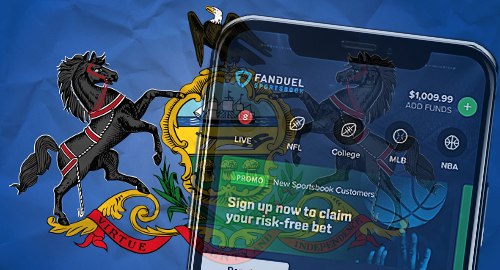 Figures released Monday by the Pennsylvania Gaming Control Board (PGCB) showed the state’s three licensed online casino sites – Parx, SugarHouse and Hollywood – generated combined revenue of $3.43m in August, their first full month of operations. The sum is more than 4x the sum generated in the last half of July.

Online slots generated revenue of $2.5m, of which the state claimed $1.36m based on its cockamamie 54% slots tax. Online table game revenue totaled $903k, which was subject to a slightly less onerous 16% tax rate. The state has yet to witness the launch of any online poker operations.

SugarHouse is currently running away with the online casino revenue crown, claiming $1.65m of August’s total, with Parx well back at $1.1m and Hollywood managing only $684k.

On the sports betting front, the state’s sportsbooks handled combined wagers of $109m in August, up from just $59.3m in July and a new market-high. The four licensed online sportsbooks reported digital handle of $83.2m, over 76% of the total. August’s betting revenue came in at $2.54m (after promotional credits), with the state taking a 36% cut of the proceeds.

August’s betting surge was in part due to the July 22 launch of FanDuel’s locally licensed operation, which claimed $35.3m of the month’s total handle. PlaySugarHouse was relegated to second place with digital handle of $25m. September’s numbers will likely get a similar boost from the September 4th launch of The Stars Group’s Fox Bet brand in partnership with the Mount Airy Casino.

Meanwhile, the market’s 12 casinos didn’t fare too badly with their mainstay brick-and-mortar slots and table operations. Statewide table game revenue improved 4% to $76.2m while slots were up 2.2% to $206.3m. And just so they don’t feel left out, we can’t forget the modest $1.4m earned by the state’s fantasy sports operators (+47% year-on-year).

All told, the state’s gaming operations generated combined revenue of just under $290m last month, around 6.3% higher than August 2018’s result and poking yet another hole in the argument that online options will reduce a state’s traditional gaming verticals.