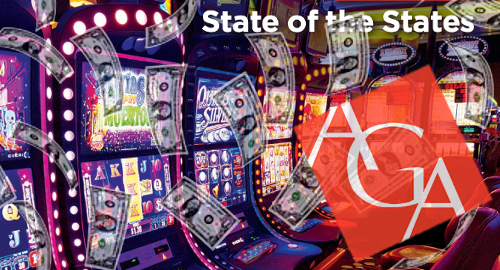 The US land-based commercial casino sector hit yet another all-time revenue record in 2018, with only two of 24 gaming states not reporting year-on-year growth.

On Tuesday, the American Gaming Association (AGA) released its annual State of the States report, which tracks the performance of the 465 commercial casinos across the US of A. The AGA says total casino gaming revenue hit $41.68b in 2018, a 3.5% improvement over the 2017 report and the fourth straight year of year-on-year growth.

Only 18 states separately report slots and table game revenue, but those states broke with tradition by reporting higher year-on-year growth in slots over tables, flipping a script that has held for some time. Slots revenue was up 3.4% in 2018, while tables grew 2.4%.

In terms of commercial casino markets, the Las Vegas Strip led the pack with $6.6b, with Atlantic City well back at $2.5b. ‘Chicagoland’ (covering operations on both Illinois and Indiana sides of the border) ranked third with $1.95b, while Baltimore-Washington placed fourth with $1.88b, well ahead of New York City’s $1.45b, thanks to Baltimore-Washington’s 6.4% annual growth following MGM Springfield’s launch.