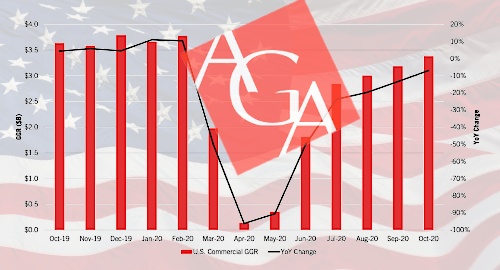 US casino operators had reason for optimism in October, the sixth straight month of sequential gaming revenue growth, but early indications are that November will put an end to this winning streak.

The latest Commercial Gaming Revenue Tracker figures released Tuesday by the American Gaming Association (AGA) lobby group shows US operators generated combined revenue of $3.38b in October, a 7% decline from the same month last year but up 6.3% from September 2020.

Nationwide sports betting handle is expected to hit a record $3b in October once the slowpokes in Illinois release their total for the month. In addition to setting a national record, all but two legal betting states set personal monthly bests for handle in October.

Before anyone gets too excited, early indications are that November will run contrary to the growth narrative, as Maryland casinos reported this week that revenue totalled only $130.4m last month, down from $142.7m in October. All six casinos reported negative sequential growth, so it wasn’t just a case of the big two playing unlucky.

It was a similar story in Ohio, where the state’s four casinos and seven racinos reported combined revenue of $133.4m in November, down from $169.1m in October, with the negativity spread across the market. As with Maryland, Ohio’s casinos are facing even more restrictive operating limits as the entire US struggles with its latest pandemic surge.

The Palazzo’s bars and restaurants will remain open (at 25% capacity), as will its gaming floor, but overnight guests are being steered to rooms at Sands’ Venetian property. Other Vegas hotels that are currently turning away guests include MGM Resorts’ Park MGM, Wynn Resorts’ Encore Las Vegas and Caesars Entertainment’s off-Strip Rio property.