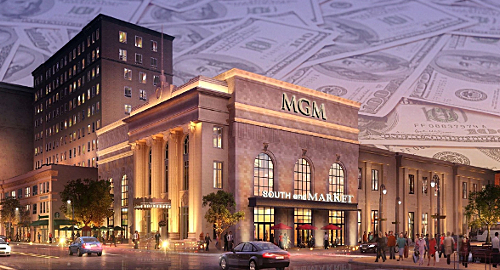 Massachusetts’ newest and largest casino generated nearly $27m in gambling revenue during its first full month of business, in what has to be viewed as a disappointing result for its operator MGM Resorts.

The $960m MGM Springfield, which opened its doors in late August, generated $26.95m, of which $8.8m came via its gaming tables and the rest from slots. Slots handle was $190m, meaning the property scored a respectable 9.5% slots hold.

By way of comparison, National Harbor, MGM’s Maryland venue, generated gaming revenue of $41.9m in December 2016, despite the casino being open for only a little more than three weeks that month. Also, Maryland has a population of 6m, roughly 1m fewer souls than Massachusetts, and National Harbor had five Maryland casino competitors versus only one slots-only property in Massachusetts.

Nonetheless, MGM Springfield president Michael Mathis said the September figures were “on track” with the company’s expectations. Mathis expressed pleasure with last month’s “solid visitor volume” and claimed the property’s hotels and restaurants enjoyed “impressive numbers of guests eager to experience what our new resort has to offer.”

Plainridge Park mostly managed to sustain its business in September despite the new competitor, as its revenue fell only $1.1m from August to September, while this September’s total was only $600k less than the property reported in the same month last year.