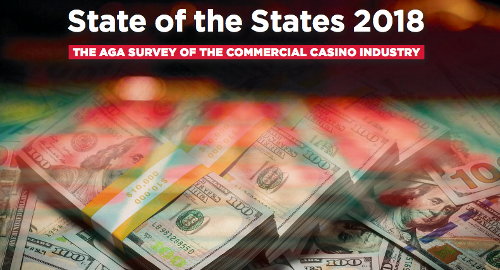 On Wednesday, the American Gaming Association (AGA) released its annual State of the States report, which showed non-tribal casino gaming revenue hitting $40.3b in 2017, up 3.4% from 2016. State governments’ share of this bounty improved 3.1% to $9.2b.

The number of casinos surveyed fell from 515 in 2016 to 460 last year due to “a rigorous effort to accurately and consistently identify individual gaming properties.” Nevada was responsible for the bulk of the decline under this new metric, with its casino count falling from 273 to 215.

Of the four states that suffered revenue declines, West Virginia led the pack with a 4.6% fall, also thanks to MGM’s National Harbor, which siphoned off customers close to the Maryland border.

Supplementary data from Oxford Economics indicated that the US commercial casino industry directly employed over 361k individuals, who collectively drew $17.4b in wages, benefits and tips last year.

Having had a change of heart regarding legal sports betting a few years back, the AGA’s report hammered home the need for policymakers to ensure that betting legislation allows state-approved sportsbooks to offer a product “attractive enough to draw bettors away” from internationally licensed betting sites. The AGA singled out Pennsylvania’s looney-tunes 36% tax on betting revenue as a cautionary tale.

Tellingly, while the AGA’s survey notes the four states that have approved online gambling, there is no dedicated section to the vertical. The AGA has been slowly adding online-only members to its land-based roster, but old habits die hard.

This online skittishness likely reflects the AGA’s ongoing reluctance to piss off Sheldon Adelson, the Las Vegas Sands honcho who threatened to pull his funding of the AGA if it lobbied for online legislation, a threat that forced the AGA to backtrack on its tentative embrace of digital gambling.