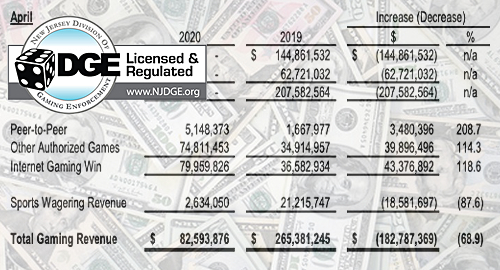 The online casino vertical was up 114.3% to a record $74.8m while online poker more than tripled year-on-year to $5.15m, manhandling the previous poker record of $3.6m set in March. So if your poker buddy has suddenly relocated the swagger he lost over the past decade or so, you’ll know why. (Don’t worry: it will only last until there’s a vaccine.)

April was the first month in which AC’s casinos were shut for the whole month, whereas in March the casinos remained open for the first couple weeks. And while the online numbers are stellar, remember that they have a long way to go before they make up for the couple hundred million or so that brick-and-mortar gaming traditionally brought in each month.

Not surprisingly, several operators set new property records in April, with the Golden Nugget’s online casino setting the bar high with $27.64m. Resorts Digital Gaming ranked second with $16.1m (over $2m of that from poker), the Borgata sites claimed third with $15.86m ($1.22m from poker), and Caesars Interactive Entertainment ranked fourth with $8.7m ($1.86m from poker).

SPORTS BETTING SUFFERING
With the casinos’ land-based sportsbooks closed, online wagering should have soared, but the pandemic-related shutdown of nearly all major sports limited betting revenue to just $2.63m, an 87.6% decline from April 2019. Betting handle totaled just $54.6m versus $313.7m last year (of which $254m was wagered online).

The Fanduel/Meadowlands combo led April’s betting chart with a mere $1.63m, while perennial runner-up Resorts Digital was well back at $604k and the William Hill/Monmouth Park tandem ranked third with $182k. No other operator scored triple-digits in April.