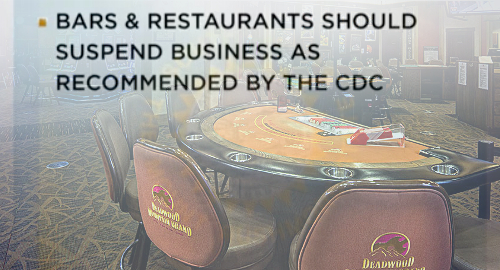 America’s commercial casino industry will be at a total standstill as of Wednesday as South Dakota’s laggards belatedly join the COVID-19 shutdown parade.

On Monday, David Ruth Jr., the mayor of Deadwood, South Dakota, penned an open letter to the city’s casino operators, urging them to close their doors to help the state’s overall effort to limit the spread of the coronavirus pandemic.

South Dakota is among the nation’s leaders in terms of most casinos per capita. Some of Deadwood’s casinos had already announced plans this weekend to voluntarily shut down and Ruth urged all casinos to do likewise as soon as possible.

Ruth noted that Noem had advised municipalities that they had the authority to order businesses to close but Ruth appeared uneager to have to take this step. “To date, I have not provided you with a directive,” adding that he hoped operators “will make a wise decision in an effort to help everyone” and “give our medical professionals the opportunity to combat this disease.”

The Deadwood Gaming Association later announced that it was working with its members to ensure all gaming operations were suspended as of noon on Wednesday. The group said it was taking this “proactive” decision “even though there are no known cases of COVID-19 in Lawrence County and no cases of community spread yet in our area.”

The 616k casino employees that the AGA said last week had already found themselves out of work will now rise to 649k. The AGA continues to push for the casino sector to be part of the fiscal stimulus package currently being haggled over in Washington, DC.

A recent Macquarie Research report suggested that some casino operators won’t be able to sustain their current cash crunch for too long. Penn National Gaming was estimated to have roughly 5.2 months’ worth of cash on hand, while rivals like Boyd Gaming and MGM Resorts could last up to nine months at their current daily burn rates.

Tribal gaming operators arguably have it much worse, as in many cases, the money they generate represents the bulk of their community’s operating capital, leaving them with some hard decisions to make as to how best to weather this storm.