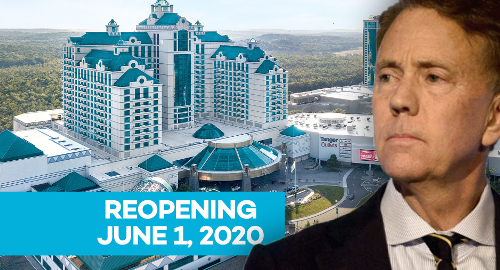 Connecticut’s tribal gaming operators will partially reopen their venues on June 1, much to the chagrin of the state’s governor.

On Wednesday, the Mashantucket Pequot Tribal Nation and the Mohegan Tribe announced that they would “begin the reopening of portions” of their reservations, which include (respectively) the Foxwoods Resort Casino and Mohegan Sun, which were shut on March 17 to minimize spread of the COVID-19 coronavirus.

The tribes say they collaborated on new safety protocols and operating procedures to minimize risks to both casino guests and staff, including protective equipment, physical distancing and mandatory masks for guests. Neither property will open its buffets, concert venues or poker rooms, while tenant restaurants will be open on a take-out only basis.

The casinos “will be catering to Connecticut and Rhode Island residents only.” No out-of-state buses will be “accepted” and “no out-of-state marketing to New York or Massachusetts will take place at either property,” although one suspects the odd VIP gambler from those states might just find a way through these roadblocks.

The tribes might be in agreement but Gov. Ned Lamont called the decision to reopen an “incredible risk,” both for staff and guests, particularly “older people … with pre-existing conditions.” Lamont (pictured) further claimed that “it’s risky for the region because you have a lot of employees that go back out into the region.”

Mohegan Tribe chairman James Gessner responded to Lamont’s concerns by noting the tribes’ commitment to deter most out-of-state customers and their public statements about urging older customers to “take specific precautions and to stay home if they are part of an at-risk group.”

Mashantucket Pequot chairman Rodney Butler told the Associated Press that state officials were welcome to tour the casinos and, if they can find “something that we’re doing in operations that we can do for the better, we’re certainly open to those conversation.”

Whatever Lamont’s concerns, he’s effectively powerless to stop the federally recognized tribes from doing as they please on their sovereign territory – although he noted Thursday that the state controls their liquor licenses. But the tribes have their own concerns, given that the casinos are the primary economic engines of their peoples.

That economic urgency was underscored this week following reports that Mohegan Gaming & Entertainment (MGE) had missed a self-imposed deadline of May 11 to raise $100m. The company is looking to ensure its liquidity position in addition to funding its expansion projects, including the Hellinikon integrated resort project in Greece.

Bloomberg reported that MGE had offered to pay 14% interest for a new loan maturing in October 2021 but would-be lenders were spooked by a variety of factors, including around $400m of MGE debt that comes due in 2021 and questions over whether claims could be made on MGE assets on tribal land should the company default.

The news will likely be used by US tribal gaming operator Hard Rock International (HRI), which still hasn’t gotten over the fact that MGE was chosen to build Hellinikon over HRI.