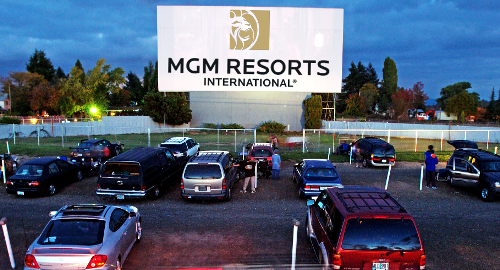 Casino operator MGM Resorts says it will likely rely on ‘drive-in’ traffic in the immediate aftermath of the COVID-19 pandemic.

Thursday saw MGM release its official first quarter financial report, the gist of which was previewed one week ago. In short, revenue was off nearly 30%, earnings were down over 60% and the company would have booked a major net loss were it not for January’s deals involving two of its major Vegas properties.

Speaking of Vegas, MGM’s new CEO Jim Hornbuckle was asked on Thursday’s analyst call about what form the company’s Strip operations will take when Nevada’s governor finally gives casinos the nod to shuffle up and deal. (Gov. Sisolak indicated Thursday that casinos will likely remain closed for the month of May.)

Hornbuckle said MGM would likely open its New York, New York casino first, “because it’s one of our simpler places to run” with around 2,000 rooms. At the other end of the scale, the Bellagio is also on MGM’s opening radar because “we want to be in the high-end business.”

After that, Hornbuckle said MGM would “go slow” and “look to the economics of opening.” Most of MGM’s Strip properties need to be hitting at least 30% to 50% of their normal occupancy rates “to generate any kind of cash that is meaningful, i.e. not going backwards from being closed.”

Hornbuckle said MGM derives around half of its Vegas business from “drive-in traffic” from surrounding states, which should help hold the fort until people feel good about boarding jet airplanes again. Hornbuckle said this drive-in traffic peaks during the summer, which could push MGM to consider opening additional properties.

MGM lost about 50% of its group bookings as the pandemic ramped up, but Hornbuckle said about half of that 50% has rebooked over the next 12 months.

MGM’s non-gaming entertainment offerings will likely be limited to small-scale affairs for the foreseeable future – Hornbuckle namechecked comedian Carrot Top as an example – while cautioning that “the idea that we’re going to get 15,000 people in T-Mobile [arena] for a concert anytime this year is probably a stretch.”

As for MGM’s other US properties, Hornbuckle said these are also ‘drive-in’ markets, so they should respond well once their respective state governments give the okay to reopen. Hornbuckle suggested Mississippi would go first, with Maryland likely second.

As for Macau, while the market may currently be in the toilet, MGM China CEO Gant Bowie said that discussions with customers indicated that “the demand’s there, the opportunity to travel is the only thing they’re looking for.” Unfortunately, Guangdong province has yet to lift its 14-day quarantine policy, and Hong Kong recently extended its quarantine policy through June 7.

Bowie said “the focus for all of us is all about the concession renewal,” as MGM’s Macau license will expire in 2022 (along with those of the other five concessionaires). Bowie said MGM had to be mindful of comments by Macau Chief Executive Ho Iat Seng about the need to diversify Macau’s economy away from gaming and so MGM was “putting aside funds that we will be in a position to obviously respond to [Ho’s] diversification strategies.”