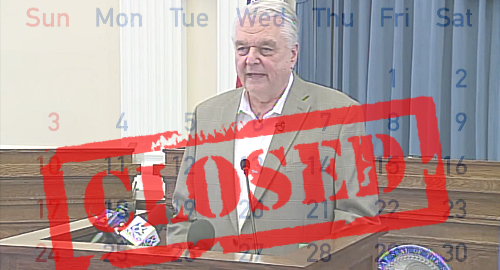 Nevada casinos will likely remain closed for the full month of May under the governor’s plan for restarting the economy following the COVID-19 pandemic shutdown.

On Thursday, Gov. Steve Sisolak unveiled what he called Nevada United: Roadmap to Recovery, aka the plan to get back to something resembling normalcy prior to the pandemic lockdown, which included the closure of all gaming venues in mid-March.

The plan is to open the state in phases, each one lasting a period of two to three weeks so the authorities can gauge the impact of each step along the way. The state will only proceed to the next phase if the data – daily case counts, hospitalizations, deaths – supports such an advance. If infection rates rise, steps will be paused and phases could even be rolled back if the data turns truly dire.

Phase One will (hopefully) start by May 15 but the businesses that will be allowed to reopen will be subject to “extremely aggressive social distancing measures.” Businesses that won’t be allowed to open in Phase One include bars, nightclubs, malls, large sports events, mega-churches and live concerts.

Sisolak (pictured) stated emphatically that gaming “will not be opening at the start of Phase One.” The final decision on gaming’s rebirth will be determined by the Nevada Gaming Control Board in close consultation with local health authorities.

Sisolak’s Thursday statement was slightly more hopeful than comments he made the day before. Sisolak told ABC News that “the casino and the gaming enterprises will probably come in the third or the fourth phase of what we’re doing here because we’re just not ready yet to handle that type of a volume.”

Nevada’s casino gaming revenue tumbled by nearly 40% in March and operators are understandably getting antsy about when they might be able to start earning again. Some Vegas casinos have begun promoting the extraordinary steps they’re taking to ensure a healthy environment for gamblers when they are allowed to return, including sneeze-guards to protect gaming table players and dealers from each other.

On Thursday, MGM Resorts CEO Bill Hornbuckle suggested that his company would likely open its Vegas properties on a staggered basis, apparently in the belief that there will be limited demand to start and thus the Bellagio and New York-New York would be able to handle whatever comes through the doors.