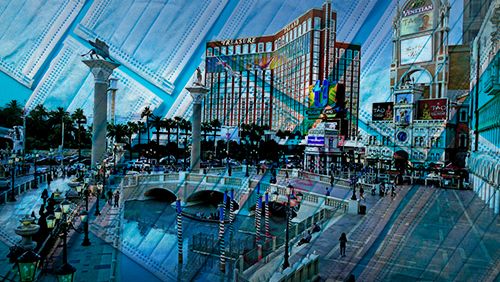 Las Vegas casinos are all starting to make their plans for an eventual re-opening, whenever that may be. As many of the bigger resorts are publishing the safety guidelines they will follow when Governor Steve Sisolak allows gambling to resume, at least one downtown casino is following the lead of Penn National Gaming and hiring a local firm to install sneezeguards.

Las Vegas-based Screaming Images, run by James Swanson, has started developing safety shields to install at table games and slot machines. The clear acrylic shields can be installed in 15 minutes, and would protect the players from each other, and the dealer, from unwanted airborne spray.

Downtown Las Vegas casino the El Cortez has already agreed to a trial run of these shields, allowing Screaming Images to install them in exchange for the free publicity they’ll get from it.

“James is really one of our best vendors by far. Very reliable and very responsive. He owns the company and yet he’s still one of the ones that comes out for a new project,” Adam Wiesberg, El Cortez general manager, told the Las Vegas Review-Journal. “So when he reached out about this new technology, and with everything being such an unknown to us and the industry, any new idea that could potentially work to protect employees and customers we’re willing to take a look at. So letting him use our tables and slot floor to create, design and develop this new technology, we welcomed it.”

Confirmed: Everything is ruined. pic.twitter.com/IhmPDqYtO1

Screaming Images isn’t a new company. The company has been in operation for 18 years, providing print and design services to resorts, as well as the Las Vegas Raiders, Golden Knights and the Aces.

These new dividers, Swanson noted, are made of clear acrylic and don’t fog up. They also don’t involve any screws, so they can easily be removed with no damage to the existing property, unlike the Penn guards which appear to be screwed right into the table. Wiesberg and others who’ve seen the setup have given it positive reviews, and a few hotel properties have already shown an interest in purchasing them for their floor.

It’s unclear at this point if the shields would help casinos lessen the need for social distancing; considering they aren’t bubbles, there’s probably still some need to keep players further apart. But if they help players feel safer, and reduce even some transmission of disease, they could be worth the investment.

And let’s face it, they aren’t the most elegant solution one could possibly imagine. But if they help casinos keep their customers safer, and allow the industry to get back in business faster, then they definitely suit a pressing need.