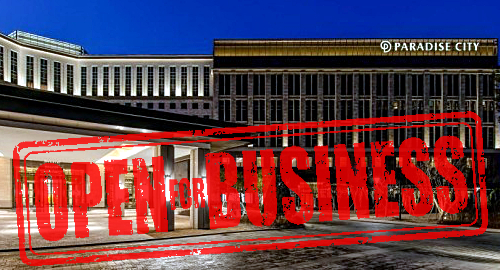 On Monday, foreigner-only casino operator Paradise Co Ltd announced that it was reopening its three gaming venues in Incheon, Seoul and Busan after weeks of pandemic-related closure. The news follows the reopening of Paradise’s casino on Jeju Island one week ago.

However, as Paradise was firing off its starter’s pistol, rival Grand Korea Leisure (GKL) was announcing yet another extension of the closure of its three foreigner-only casinos. The new hopeful reopening date is May 6, which would mark seven weeks since GKL’s three Seven Luck-branded casinos originally shut their doors.

Similarly, South Korea’s largest casino Kangwon Land, which shut its doors on February 23, announced last Friday that it was extending its closure until Monday, May 4 at 6am. Kangwon Land previously forecast that remaining closed until April 20 would cost KRW296b (US$240m) in lost revenue.

South Korea’s efforts to reduce COVID-19 spread – including hundreds of testing facilities, contact tracing of infected individuals and, unlike some countries, an apparent respect for science – appear to be having the intended impact.

The country announced only 13 new COVID-19 infections on Monday, a significant improvement from the hundreds of infections recorded per day in early March. The current number of active cases has fallen from nearly 8k in mid-March to just over 2k, while daily deaths have been averaging only two for several days running.

It’s not entirely clear why GKL isn’t following Paradise’s lead in getting back to business, but Kangwon Land is a special case, given that it’s the only Korean casino in which local residents have access to the gaming floor. It’s one thing for a bunch of foreigners to be exposed to a potentially life-threatening virus, but putting locals’ lives in jeopardy won’t earn Kangwon Land any favors with an already testy government.