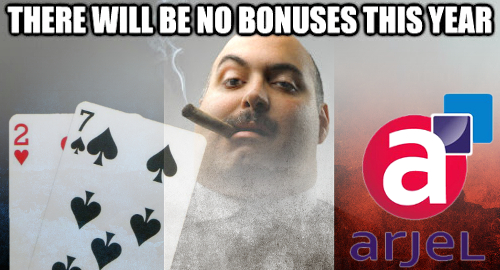 France’s online gambling regulator has instructed its online poker licensees to stop offering bonuses to players who might be tempted to play more during COVID-19 self-isolation.

On Tuesday, French regulator ARJEL issued a notice regarding the current paucity of live sports and racing events, which has left France’s online gamblers with few legal options besides online poker (France has yet to authorize online casino gambling).

ARJEL said online poker revenue has “increased significantly in recent weeks,” coinciding with restrictions on public gatherings that led to the suspension of most sports and racing events. This was “attracting more players and in particular new players” to online poker, who might not be used to this “more intensive practice.”

ARJEL said operators “should not multiply incentives to gambling” by offering bonuses to players and should be “particularly vigilant” about players exhibiting signs of problem gambling activity. ARJEL also urged players to make use of programs intended to limit deposits, spending and time spent playing poker.

Even prior to the pandemic, France’s online poker market was on the upswing, posting an 18% year-on-year revenue gain in the final quarter of 2019, in part because bonus offers to players were up 36% during the quarter.

PMU FINED €900k FOR BEING TOO COOL FOR POOLS
Pari-Mutuel Urbain (PMU) includes online poker in its product mix but the company’s primary claim to fame is betting on racing and sports. The company formerly held an online race betting monopoly in France but PMU has now been fined €900k by the French Competition Authority (FCA) for abusing that dominant position.

The FCA was responding to a complaint filed by rivals Betclic Everest Group and Zeturf, who accused PMU of offering identical odds on both its retail and online betting channels for wagers on international racing pools. PMU, which retains its land-based race betting monopoly in France, was ordered in 2014 to separate its online/retail pools to ensure a level playing field with online-only rivals.

But it seems PMU only separated the liquidity on pools for French races, while enjoying the liquidity advantage on the international pools. The FCA said this breach was all the more serious given that PMU couldn’t have failed to understand that the “unambiguous” 2014 agreement covered all racing, not just France-based meets.

Pravettoni wasn’t officiating any of these matches, but the Tennis Anti-Corruption Program prohibits all tennis officials and players from wagering on the sport. If Pravettoni commits no further breaches, the TIU will forgive $4,500 of the fine and knock his suspension down to five months.

TOUR DE FRANCE DELAYED, NOT CANCELLED
In a break for French-licensed betting operators, the governing body that oversees the Tour de France bicycle race announced Wednesday that this year’s event, originally scheduled to start at the end of June, will now get underway on August 29.

Sportsbook operators, who have already dealt with the suspension of top-tier football and the outright cancellation of the UEFA European Championships and marquee events in countless other sports, will undoubtedly welcome the cycling news, assuming there’s no second pandemic wave that sweeps across Europe come the summer.