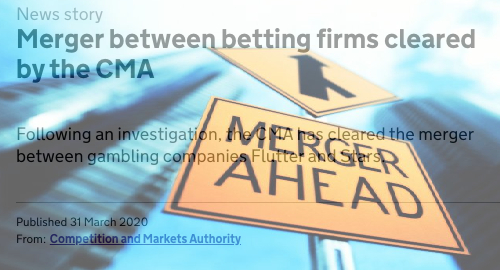 The online gambling mega-merger of Flutter Entertainment and The Stars Group (TSG) has received a thumbs-up from the UK’s competition watchdog.

On Tuesday, the UK’s Competition and Markets Authority (CMA) announced that the proposed merger of the UK-listed Flutter and the Toronto/Nasdaq-listed TSG “will not worsen the offering to people who choose to bet online.” The news pushed the share prices of both companies up sharply on their respective exchanges.

In February, the CMA opened its investigation of the merger, which was announced last October, based on concerns that it might result in “a substantial lessening of competition within any market or markets in the United Kingdom for goods or services.”

The CMA said the evidence it gathered during its probe determined that, while the merging companies do completely closely, “they are among a number of close competitors” with whom online gambling customers “frequently open accounts and to whom they could easily switch.”

The CMA therefore concluded that allowing the merger to proceed would not result in customers receiving “less favorable odds, less generous promotions or poorer quality products … as a result of reduced innovation in pricing or app experience.”

Flutter CEO Peter Jackson issued a statement calling the CMA’s decision “a further important milestone” in the union of the two companies. TSG issued a similar statement saying the firms continue to work with other regulatory bodies whose approval is required for getting these two gambling kids to the church on time.

Jackson said approval of some of those other bodies, which include the UK’s Financial Conduct Authority, could be delayed due to the COVID-19 pandemic, which has upended standard operating procedure pretty much everywhere.

The merger also requires the approval of both companies’ shareholders at scheduled extraordinary general meetings in late-April, although whether these meetings proceed as planned will largely depend on whether the pandemic’s spread is arrested by social distancing requirements.