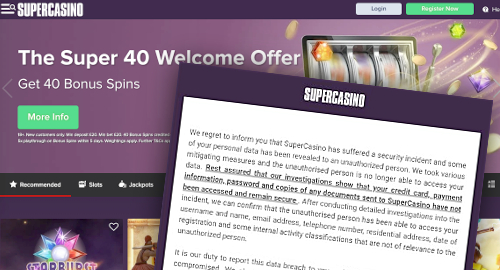 UK-facing online casino site SuperCasino is scrambling to reassure its customers after suffering a data breach earlier this month.

On January 17, a member of the CasinoMeister affiliate forum posted the contents of an email that SuperCasino sent to its customers, warning them that the site had “suffered a security incident and some of your data has been revealed to an unauthorized person.”

SuperCasino cautioned that, while the unauthorized person had accessed customers’ names, usernames, email addresses, phone numbers, physical addresses and date of registration, the interloper had not gained access to customers’ credit card, payment information, passwords or copies of any documents customers may have sent to SuperCasino.

SuperCasino added that it had taken “various mitigating measures” to ensure the unauthorized person could no longer access customer data. But the site urged customers to reset their SuperCasino password as well as passwords for other sites that are similar may have any links to the improperly accessed data.

SuperCasino also urged customers to pay particularly close attention to any emails they might receive asking them to change their password or username, or asking them to provide this data, change payment methods or transfer money to a new bank account.

The Malta-based SuperCasino is a subsidiary of Nordic online betting operator Betsson AB, which acquired the site in February 2017 through its deal for UK television gaming operator NetPlay. Other CasinoMeister members reported that Vernons, another NetPlay brand, had sent its customers a similar notice regarding their data being accessed without permission.

SuperCasino’s upfront response to its data breach stands in sharp contrast to the recent reaction of Nigerian sports betting operator SureBet247, which categorically dismissed reports of its customer data spreading around the world — despite ample evidence to the contrary — and accused those who tried to sound the alarm of “pure blackmail.”