Casino operator MGM Resorts has inked a new partnership with the National Football League’s Las Vegas Raiders while the boss of the Washington Redskins wants betting windows at his team’s new digs. 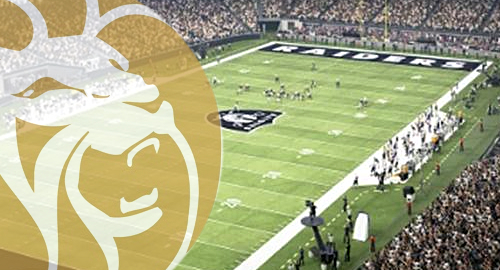 On Thursday, MGM announced that it had signed on as an Official Gaming Partner of the Las Vegas Raiders, who officially shed their Oakland roots for good just the day before. MGM also became a Founding Partner of Allegiant Stadium, which will be the Raiders’ new home field when the next NFL season kicks off this September.

MGM, which previously signed a gaming partnership with the New York Jets, will now have prominent signage throughout Allegiant Stadium and will run a VIP lounge called the MGM Club. In exchange, the Raiders get a lot of MGM’s money, some of which will hopefully be used to finally give Raiders owner Mark Davis a grownup haircut.

MGM isn’t the first casino operator to have hooked up with the Raiders, as Caesars Entertainment was named a founding partner of the new stadium over a year ago. Caesars also struck a marketing partnership with the NFL’s Baltimore Ravens and became the NFL’s first Official Casino Sponsor in January 2019.

Over on the east coast, Washington Redskins owner Daniel Snyder is reportedly threatening to move his team from its current home at FedEx Field in Landover, Maryland unless state officials authorize legal betting and specifically allow wagering at the team’s home stadium.

This week, the Washington Post quoted a Maryland state senator saying Snyder was keen to build a new stadium on the same ground on which FedEx Field currently resides. But Snyder reportedly told five Maryland lawmakers that this plan was contingent on the state acting swiftly to pass betting legislation.

Some Maryland lawmakers have already introduced new betting legislation which would require amending the state constitution via a voter referendum, possibly on this November’s election ballot. Many of the state’s biggest casino operators, including MGM, have already come out in favor of Maryland joining the betting brigade.

Ironically, the Redskins are technically based in Washington, DC – FedEx Field is only five miles away from the city – which has authorized legal betting (although betting has yet to start). Capital One Arena, the home of Washington’s NBA and NHL franchises, has an in-stadia betting deal with UK bookmaker William Hill.