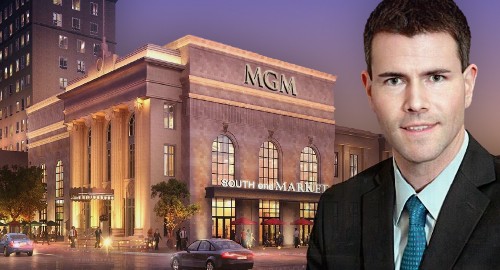 MGM Resorts’ Massachusetts casino has appointed a new president as the struggling property goes back to the drawing board.

On Tuesday, MGM Resorts announced that Chris Kelley, the current president of Ohio’s largest casino MGM Northfield Park, would be leaving that role to become the new president of MGM Springfield, the company’s 16-month-old casino in the southwest corner of Massachusetts.

Kelley (pictured), a New England native, is replacing Mike Mathis, who is transitioning to a role at MGM’s head office as its new senior VP of business development. Kelley’s former role at Northfield Park will be filled by Matt Buckley, who’s leaving his position as VP of marketing at MGM Grand Detroit (where Kelley also formerly served).

MGM regional portfolio president Jorge Perez said Kelley was selected as MGM Springfield’s new boss due to his stellar work in handling Northfield Park’s transition from its previous identity as the Hard Rock Rocksino following MGM’s acquisition of the property in September 2018.

There’s no question that MGM Springfield could use a shot in the arm. The casino has struggled since last summer’s opening of rival Wynn Resorts’ much flashier Encore Boston Harbor, and Springfield closed out 2019 by reporting a new record low for gaming revenue in the month of December.

Murren said Springfield would increase its marketing efforts to ensure local residents understand that the property offers “a holistic entertainment experience” that extends well beyond gaming. Regardless, Murren emphasized that the company was “in it for the long game” and thus wouldn’t be overly concerned by occasional gaming revenue slumps.

MGM Springfield is the second Massachusetts casino to impose changes at the top in the past three months. In October, Encore Boston Harbor bid buh-bye to president Robert DeSalvio, replacing him with Brian Gullbrants after the new casino underwent its first gaming revenue decline. At this rate, we presume that the president of the state’s equally struggling Plainridge Park Casino is glancing anxiously over his shoulder.