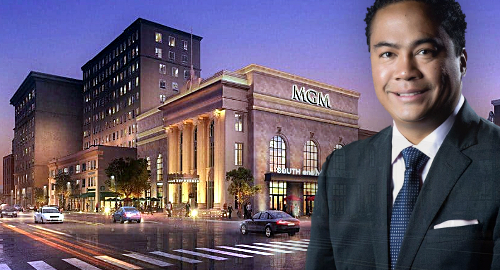 MGM Resorts’ new Massachusetts casino is celebrating its first year of operations by admitting that the company may have underestimated the pulling power of its Connecticut casino rivals.

MGM Springfield will celebrate the one-year anniversary of its launch this week, a year that has witnessed the property fail to match its early revenue projections. The company originally claimed the casino would generate gaming revenue of $418m, or around $35m per month, in its first year. Instead, the property generated less than $253m in its first 11 months and hasn’t exceeded $27m since its first full month of operations.

MGM Springfield president Michael Mathis struck an optimistic tone in talking with local media on Monday, noting that the property had welcomed 6m visitors in its first year. Mathis also claimed that gaming revenue was “not the only part” of the casino’s impact, citing its “successful, profitable” restaurants and the overall success of its hotel.

Mathis (pictured) claimed the casino was “really successful” in convincing customers to make repeat visits and the property was constantly making small adjustments to ensure customers came away with positive views of the property.

MGM Springfield has also failed to sustain its original projections for hiring 3k staff. While it boasted that number at its opening, the property’s payroll has since slid to 2,300. Mathis said local officials hadn’t given MGM any grief over this shortfall, apparently too busy being “thankful” for the jobs that had been created.

Based in the southwest of the state, MGM’s main competition comes from the two tribal casinos in Connecticut: Foxwoods and Mohegan Sun. Mathis noted that Springfield “has some really strong competitors that have been in the market for 20-plus years … I think we underestimated that level of loyalty and what it would take for those customers to give us a shot.”

However, both of those casinos posted declines in slot machine revenue for the fiscal year ending June 30. Mohegan Sun was down 6% to $567.5m while Foxwoods fell 7% to $443.2m. In fact, both properties have now posted year-on-year slots revenue declines for 13 straight months. Despite this downturn, Matthis believes “talk of oversaturation” in the local casino market is overblown.

MGM filed a lawsuit this month challenging the right of those two casinos to build a joint venture property in East Windsor, just over the border from MGM Springfield. On Monday, Mathis denied that MGM was “obsessed” with the tribes’ East Windsor proposal, which he nonetheless rubbished as not a “compelling destination” that “does not offer what we do.”