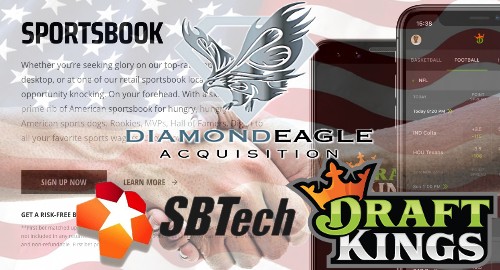 Sports betting has a new major player as DraftKings confirmed its takeover of/merger with tech supplier SBTech and its intention to begin a new life as a publicly traded company.

On Monday, DraftKings confirmed rumors that swirled in October regarding its potential purchase by Nasdaq-listed Diamond Eagle Acquisition Corp, a ‘special-purpose acquisition company’ founded by former Hollywood exec Jeff Sagansky. The plan is essentially a reverse merger through which DraftKings will finally make its Nasdaq debut with an estimated value of $3.3b.

The deal, which is expected to close in H1 2020, will also see DraftKings absorb European betting technology supplier SBTech, confirming rumors that began circulating this summer. The deal will dramatically expand DraftKings’ geographic presence, which is for the moment almost entirely confined to the United States. SBTech currently derives 54% of its revenue from Asian markets and 42% from Europe.

DraftKings CEO Jason Robins said the combination would create “a vertically-integrated powerhouse.” SBTech chairman Gavin Isaacs logrolled back, saying the two companies shared “a similar innovation DNA” and the combination of two “tech-native companies with the customer at their cores” would crush all rival firms like the insignificant insects they are (we’re paraphrasing).

Monday’s news caused a steep plunge in the share price of SBTech rival and DraftKings’ current betting technology supplier Kambi, forcing a halt in trading on the Stockholm exchange after Kambi’s shares had shed nearly one-third of their value.

It was only this August that Kambi and DraftKings expanded their ties to include eight additional US states, leading Robins to call Kambi “a key partner.” Beyond expediency during the SBTech transition, it’s unclear why DraftKings chose to expand its Kambi connection if the SBTech deal was serious from the get-go. On Monday, Robins spoke live on CNBC and on a pre-recorded investor presentation, but offered no hints as to how long Kambi would remain linked with DraftKings Inc.

DraftKings intends to retain Robins as its CEO and will continue to maintain its headquarters in Boston but the company will reincorporate in Nevada. The public listing will finally offer the world a chance to poke through DraftKings’ financial details, which have remained a tightly guarded secret until now.

In other DraftKings news, company co-founder Matt Kalish (who, like Robins, will remain at his post following Monday’s deal) announced Monday that the site would commence mobile sports betting operations in New Hampshire “at some point during the day on December 30.” Last month, DraftKings was awarded a near-monopoly on digital wagering in the state, while rival Intralot won the right to offer wagering via retail kiosks at local lottery retailers.

UPDATE: Kambi CEO Kristian Nylén issued a statement late Monday saying the company “has today been made aware” of DraftKings’ news. Referencing Kambi’s recent extension of its deal with DraftKings, Nylén said “no notice of termination has been given” by DraftKings and that “should that type of information be given, we will inform the market.”