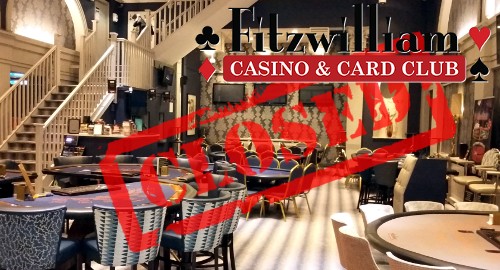 On Monday, the Fitzwilliam Casino & Card Club announced that it would be immediately closing its doors after 16 years of operation, throwing 78 local residents out of work. A spokesperson said the announcement was made with “great sadness and regret” and the private members Club would now be focusing on seeing its staff through this difficult transition.

The Club said the shutdown was due to the government’s recent approval of its Gaming and Lotteries (Amendment) Act, 2019. The Act, in addition to imposing new maximum stakes and payouts on gambling machines, also contains language that the Club claims has effectively made it impossible to continue operating.

The Act expands the definition of ‘unlawful gaming’ to include any activity lacking a ‘gaming permit’ or ‘gaming license.’ Trouble is, the ‘license’ limits operators to the aforementioned gambling machines while the ‘permit’ allows only gambling in which the player and the banker face equal odds.

Since the games offered at the Club have the same built-in house edge as every other casino in the world, the Club was left with few options. Local media quoted the spokesperson saying the Club had “sought to engage with the government” on a workaround solution but “our pleas fell on deaf ears.”

The Club may not have permanently closed, as its operators remain hopeful that a solution can be included in the Gambling Control Bill, the perpetually delayed piece of legislation that was originally published in 2013 and never seems to get any closer to passage.

NORTHERN IRELAND TAKES ANOTHER LOOK AT GAMBLING RULES
Meanwhile, Northern Ireland’s Department for Communities (DfC) has launched a public consultation on the “effectiveness” of the region’s “outdated” gambling legislation, which the DfC believes “has not kept pace with industry and technological changes; it is also complex and inflexible.”

Northern Ireland’s current gambling law dates back to 1985 and permits bookmaking in roughly 300 licensed betting shops and at the tracks (two each for dogs and ponies), as well as gaming machines in amusement arcades, some 40 commercial bingo clubs and local lotteries.

The gambling machines in Northern Ireland betting shops are currently limited to seriously low stakes and payouts, there are no proper casinos and online gambling is technically taboo but widely available (enjoyed by 15.8% of local gamblers in a 2016 prevalence survey).

Other items up for discussion include the role of gambling advertising, whether operators should pay a statutory levy to fund responsible gambling programs, whether Northern Ireland needs its own gambling regulatory body and whether or not gambling cheats should be drawn and quartered (even if their cheating is unsuccessful).

The consultation document can be read in full here and taxpayers and stakeholders are invited to make their views known by February 21, 2020.