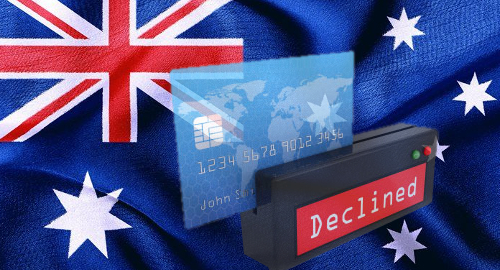 Australia’s online sports betting companies could be blocked from accepting credit card wagers depending on the results of a public consultation by the nation’s bankers.

This week, the Australian Banking Association (ABA) announced a consultation paper on the “use of credit cards for gambling transactions.” The consultation will solicit “community views” about “the role of banks in addressing” problem gambling.

The ABA notes that some of its members, including Macquarie, have already taken steps to prevent the use of credit cards for gambling or lottery purchases. Members have also introduced other initiatives intended to minimize gambling’s potential harms but the ABA states that the use of its products “to finance problem gambling” remains a concern.

While the Aussie government previously banned credit card gambling in casinos and on the video poker machines in pubs and clubs, those measures predated the arrival of the country’s regulated online wagering market. The ABA notes that the number of Australians who placed an online wager more than doubled over the past seven years.

The ABA’s consultation includes five questions, intended to determine (a) the risks and concerns of credit card gambling, (b) whether such activity should be restricted or prohibited, (c) if such restrictions should apply to all forms of gambling, (d) the potential downsides of such restrictions, and (e) if there should be a transition period for any new restrictions.

The consultation began taking submissions on Thursday and citizens have until March 4 to speak their piece. The ABA requested that submissions “make use of empirical evidence as far as possible.”

Australia is only the latest jurisdiction to mull further restrictions on credit card gambling. The UK Gambling Commission is currently conducting its own consultation on credit card use and the Tory party’s general election manifesto says it plans to review the 2005 Gambling Act to tackle “credit card misuse.”

SELF-EXCLUSION REGISTER APPROVED
Thursday saw the Australian parliament approve the country’s first national self-exclusion register, part of the government’s new National Consumer Protection Framework. The Australian Communications and Media Authority has been tasked with procuring an independent third-party tech provider to get the site up and running by its target launch date of May 26, 2020.

BET365 BASHED
Meanwhile, the Aussie operations of online betting giant Bet365 are taking a drubbing in local media courtesy of a self-described disgruntled former staffer. James Poppleton, who worked for 18 months as a customer account supervisor at Bet365 Australia, told ABC that he had “a burden on my conscience” regarding his time with the company, because “what Bet365 does is not fair.”

Poppleton’s allegations center on Bet365 algorithms both limiting the size of successful bettors’ wagers and boosting wagering limits for losing punters. Poppleton called Bet365’s tactics “the opposite of responsible gambling.”

Poppleton also claimed insider knowledge of Bet365 delaying in-play wagers placed by its customers over the phone (Australia doesn’t permit online in-play betting). Poppleton claimed the delay of 1-3 seconds was intended to give Bet365 more time in which to decide whether a sharp bettor was ahead of their trading team.

Bet365 told ABC that the company “has never used any form of delay” in its Australian telephone in-play service and that its phone system “does not have any such functionality.” Poppleton himself noted that he had an ‘acrimonious relationship’ with the company before leaving and predicted that Bet365 would call him “a disgruntled employee.”