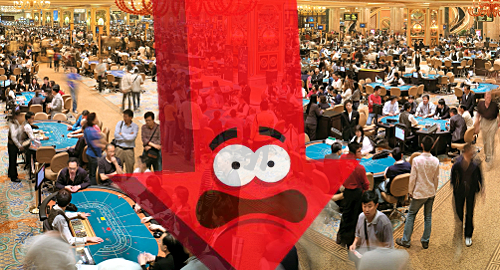 Macau casino gaming revenue fell hard in the month of November although the final stats were slightly better than many analysts had forecast.

November’s decline marked the seventh month of year-on-year declines so far in 2019, and the 8.5% decline was second only to the 8.6% fall the Macau market suffered in August. November’s revenue was the second-lowest this year, above only September’s MOP22.1b.

Macau’s current woes have largely been laid at the doors of the casinos’ VIP rooms, which have struggled as high-rollers give Macau a wide berth. The VIP skittishness has been attributed to a number of factors, including tightened liquidity for some manufacturing execs as the US-China trade war drags on and Chinese authorities’ renewed interest in the activities of certain junket operators.

Macau’s overall market performance would have been much more dire were it not for strong growth in the mass market gaming segment, which overtook VIP baccarat revenue in the first quarter of 2019 and has held that lead ever since.

For the year-to-date, gaming revenue is down 2.4% to MOP269.7m (US$33.4b), and it appears almost certain that Macau’s two-year streak of annual revenue growth will end in 2019. Macau posted annual rises in both 2017 and 2018 after three years of significant declines that started in 2014.

December is expected to extend Macau’s gaming revenue decline as Chinese President Xi Jinping is scheduled to visit Macau mid-month to mark the 20th anniversary of Macau’s handover from Portugal. Ahead of Xi’s visit, China imposed temporary restrictions on exit visas for Macau-bound travelers on November 22 that will extend through December 20.