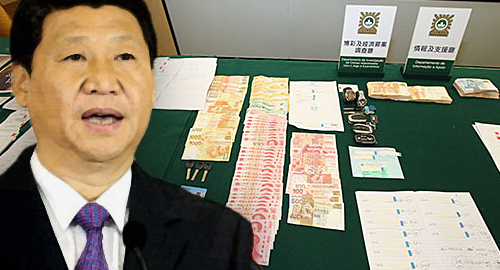 Macau casino loansharks are laying low after local police dismantled a major kidnapping ring ahead of a visit from China’s president next month.

This week, Macau’s Judiciary Police (PJ) and their counterparts in the neighboring city of Zhuhai announced that their Double Arrow joint operation had resulted in the arrest of 55 individuals suspected of involvement in a ‘usury syndicate’ that was active in local casinos.

PJ spokesperson Choi Ian Fai told local media that the operation was sparked by a tip that came in nearly two years ago. The suspects, who are a mix of local residents and mainland Chinese, have reportedly been offering illicit loans to Macau gamblers since 2013, earning profits of around HK$70m (US$9m) in the process.

Among the charges facing the suspects are “deprivation of others’ freedom of movement,” indicating that the suspects would hold indebted gamblers hostage until they could make some arrangements to repay the money they’d borrowed, usually by contacting friends of relatives on the mainland.

Monday’s raids also targeted a number Macau casino VIP rooms, from which they seized around HK$400k in cash from 17 “junket accounts.” More arrests are likely to follow, given that the authorities recovered a number of flash drives on which the gang’s financial data was recorded.

Earlier this week, Macau’s government revealed that, while the special administrative region’s overall crime rate was stable, gaming-related crime was up nearly one-fifth. Gaming-related loansharking operations had risen by more than one-fifth while illegal detentions of indebted gamblers were up more than one-quarter.

As such, Monday’s raids could be viewed as a ‘look busy, the boss is coming’ move, coming as they do just weeks ahead of a rumored visit to Macau by Chinese President Xi Jinping, who is expected to descend on the region between December 18-20 to celebrate the 20th anniversary of Macau’s official handover from Portugal to China.

The last time Xi was in Macau was in December 2014, and he used his visit to urge Macau to diversify its economy beyond gaming. Xi will undoubtedly challenge his hosts to demonstrate that they’ve been implementing his vision for Macau’s future.

Interestingly, Xi’s 2014 visit came as Macau was undergoing a severe VIP gaming slowdown, a slump that Macau only recovered from last year. With Xi’s arrival imminent, current market trends have seen the struggling VIP market overtaken by the mass gaming segment. Maybe there’s something to that ‘man of the people’ propaganda after all.