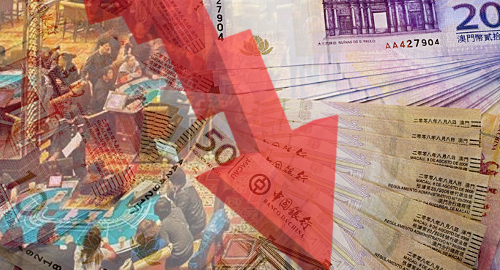 October’s decline followed September’s modest 0.6% year-on-year improvement, but there have now been six months so far this year that have posted annual declines versus just four monthly gains. On the plus side, October’s decline was the second-lowest this year behind the -0.4% slip in March.

Analysts pinned October’s fall on the ongoing US-China trade war and its negative impact on both China’s overall economy and the value of the yuan, as well as the social unrest currently gripping Hong Kong. Sanford C. Bernstein analysts suggested Macau’s VIP gambling market was down by more than one-fifth in October while mass market revenue was as much as 12% higher, despite what was viewed as a lackluster showing during the annual Golden Week holiday.

That VIP/mass disparity isn’t entirely bad for Macau casino operators, who derive a far greater net return from mass market gaming than from VIP, as the latter must be shared with the junket operators who recruit high-rollers to visit Macau.

Macau’s overall mass market gaming segment has been outperforming the VIP sector for some time and mass baccarat revenue came tantalizingly close to eclipsing the VIP version in Q3. The Sanford analysts said they expected the VIP segment’s ‘volatility’ to continue in the near-term, despite Melco CEO Lawrence Ho‘s recent claim that he was seeing ‘stabilization’ in his company’s VIP activity.