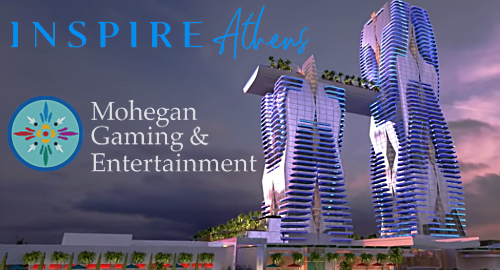 Last Friday, Greece’s Hellenic Gaming Commission announced that MGE and rival Hard Rock International (HRI) were the only two bidders for the sole 30-year casino license at the €8b Hellinikon integrated resort project to be built on the site of Athens’ former international airport.

On Tuesday, MGE unveiled plans for what the company and its local partner GEK Terna are calling INSPIRE Athens. Its design comes courtesy of Nevada-based Steelman Partners, which has experience designing casino projects in Macau, Vietnam and the Philippines and was recently tapped to handle NagaCorp’s Naga3 expansion in Cambodia’s capital Phnom Penh.

MGE CEO Mario Kontomerkos – who wasn’t above playing the homeboy card, noting his Greek-American heritage – expressed hope that INSPIRE Athens “would be the catalyst that sparks the entire development of the Hellinikon area into the coveted Athenian Riviera, forever redefining the modern identity of Greece.”

The project’s design leans on classical Greek architecture and sculpture while adopting what Paul Steelman called “a new stylistic narrative that inspires the region’s future.” (Check out the video below for Steelman’s intentions for the project.)

In addition to the standard assortment of hotels, entertainment venues, convention, dining and shopping options – and oh yeah, a casino – the project boasts an elevated infinity pool that connects the project’s twin towers, recalling Las Vegas Sands’ iconic Marina Bay Sands resort in Singapore (for which Steelman was the original designer before being replaced by Moshe Safdie).

HRI has yet to share specifics of its project, although company execs have said the resort will coast around €1b. The Greek government has vowed to choose between MGE and HRI’s competing visions by the end of November.

MOHEGAN SUN V. MELNYK LAWSUIT SOLDIERS ON
In other MGE news, the company shows no sign of backing down in its bid to collect $900k in unpaid gambling markers from Eugene Melnyk, the billionaire owner of the National Hockey League’s Ottawa Senators franchise. Melnyk ran up the debts at MGE’s flagship Mohegan Sun casino in Connecticut in 2017 and the five bank drafts he gave the casino all bounced.

Melnyk’s attorneys claimed last week that casino staff “induced” him to keep gambling by refusing to let him cash out his chips while he was ahead, after which his luck deserted him. Melnyk was apparently a longtime Mohegan whale, as court documents show the exec applied for $1m worth of credit at the casino as far back as 2004.

On Friday, Melnyk’s lawyers asked the Connecticut court to split the case into five separate counts, one for each bank draft. The motives for this request aren’t clear, but it could be to guard against one big settlement or simply to try to make the process as onerous for MGE as possible.

Monday saw MGE’s attorneys effectively call Melnyk’s bluff, agreeing to split the case into five separate counts. The parties are due back in court on October 15th.