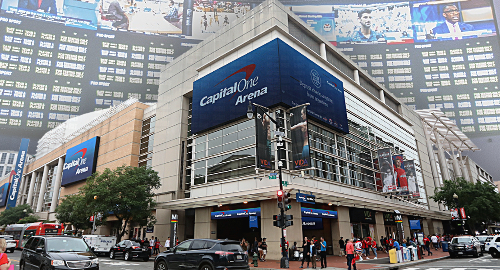 Bookmaker William Hill will open the first US in-stadia sportsbook following a deal with a Washington, DC-based sports and entertainment giant.

The deal calls for William Hill US to open a sportsbook at Capital One Arena, the home venue for the above Washington franchises. This marks the first time a US pro sports venue will host a legal sports betting operation, in keeping with Leonsis’ previously announced plans.

Hills says the new sportsbook “will span multiple floors, will be open daily, year-round, and accessible to the public from F Street,” thereby allowing access by both “ticketed and non-ticketed fans.” Fans will also have access to Hills’ mobile wagering app, as permitted under the sports betting legislation approved by the District of Columbia earlier this year.

Construction of the new sportsbook will commence following regulatory approvals. William Hill US CEO Joe Asher predicted the new hub will become “a flagship venue for the industry,” while Leonsis believes the addition will make Capital One Arena “the premier sports and entertainment destination in Washington, D.C.”

The TRO was sought by a local software developer who wanted the right to bid on DC’s mobile betting tech contract and the judge deemed there was a “substantial likelihood’ of the legal challenge succeeding. On Tuesday, Judge John Campbell extended the TRO until October 18, by which time a decision on the legality of Intralot contract will be handed down.

Whatever decision is made on October 18, the losing party is expected to appeal. The contract granted Intralot a monopoly on mobile sports betting except at local bars and sports arenas or within a two-block radius of those venues, so the Capital One Arena may end up being one of the only mobile betting options for some time to come.