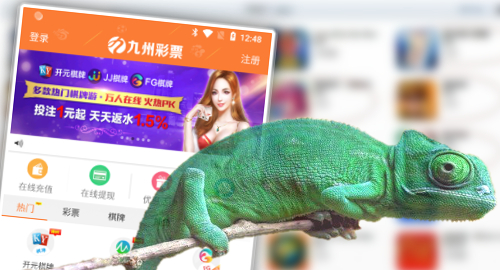 Asian-facing gambling apps are disguising themselves as non-gambling products to circumvent restrictions in both Apple and Google app marketplaces.

On Thursday, researchers at Trend Micro announced that Apple’s iOS App Store and Google Play had purged “hundreds of fake apps” that Trend Micro discovered were gambling apps masquerading as apps dealing with far less controversial subjects, such as weather, travel or wine.

Trend Micro noted that some of these ‘chameleon’ apps that it reported were ranked in Apple’s top-100 and rated over 100k times, despite featuring “descriptions that are inconsistent with their content.” The apps had lower rankings in Google Play, reportedly because they only began appearing in that marketplace in August.

The apps initially displayed content consistent with their descriptions, but the designers had built in an application programming interface (API) that allowed the app to eventually reveal its true colors, apparently after having passed muster with Apple or Google watchdogs and end users had downloaded the app.

Trend Micro emphasized that it has so far been unable to find evidence that these chameleon apps contain malware beyond their shape-shifting ability.

Many of these apps were focused on Asian markets where gambling in almost any form is strictly prohibited. One of the apps on China’s iOS App Store had been rated 440k times. Trend Micro found links to these apps from searching for ‘Beijing Racing,’ which bears a resemblance to an app that has previously been associated with illegal online gambling operations.

In July, Chinese state-run media criticized Apple for aiding a “download scam” in which Chinese iOS users were convinced to download apps based on glowing ‘fake reviews’ in the App Store, a concept known locally as ‘brushing.’ The report slammed Apple for apparently being incapable of reining in this practise.

Apple has been clamping down on gambling activity – even the play money kind – in its iOS App Store, although it recently gave gambling companies more time in which to ensure their apps were native and not ‘wrapped’ in HTML5 code “in order to provide users with the secure and curated experience that they expect on the App Store.”

Google restricted real-money gambling apps from Google Play way back in 2013 but began relaxing this restriction in 2017. However, both companies have proven willing to purge gambling apps from country-specific stores, particularly in Asian markets, rather than risk being shut out from an increasingly important segment of the global marketplace.