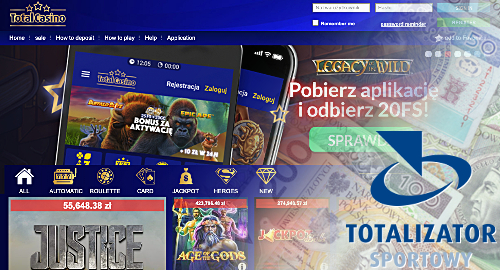 On Wednesday, Totalizator Sportowy president Olgierd Cieślik announced that his company’s new Total Casino product had returned profits of PLN48m ($12.2m) to the government since the site’s December 2018 launch.

Total spending on the site hit PLN2.3b, of which all but PLN100m was returned to the site’s customers, whose ranks currently stand at over 64k. One of these lucky customers won a PLN514k jackpot in July, the biggest payday in the site’s eight-month history. Average deposits to date are around PLN120 ($30).

Totalizator Sportowy’s overall sales in the year to date hit PLN5.2b, almost equalling the PLN6.1b sales figure the company generated in all of 2018. Cieślik said Total Casino’s performance to date has “not only met our expectations, but are better than we expected.”

Cieślik previously suggested that Total Casino would account for 30% of Totalizator Sportowy’s sales within three to four years, but the site has already breached the 40% mark. Total Casino’s FY19 sales are projected to top PLN3.8b, a number that Cieślik expects to double within “a maximum of two years.”

Total Casino is also available via a mobile app, which is generating around 70% of the digital offering’s traffic, according to Maciej Kasprzak, Totalizator Sportowy’s director of online games.

Besides the state-run monopoly, Poland currently has 14 online gambling licensees, all of which are limited to sports betting. The government protects these licensees by constantly expanding its blacklist of unauthorized online gambling domains deemed to be serving Polish punters without local approval.

As of Wednesday, the blacklist includes 7,098 domains, up from 6,553 as of April 4. The new entries include some familiar faces, including Bet-At-Home, Betsson, PartyPoker, Pinnacle and Unibet. The list also includes several dozen casino domains operated by Fortuna Entertainment Group, which holds a Polish betting license but remains prohibited from offering casino products in the country.

Previous editions of the blacklist included dozens of domains belonging to French operator Betclic Everest Group, which launched its Polish-licensed site in June. The operator technically never left the Polish market, leading some local operators fuming at the government’s decision to award Betclic a license.

Undeterred, Betclic has embarked on a branding campaign that saw it sponsor Poland’s national men’s volleyball team in July. Betclic followed that up this week with its first ever Polish football sponsorship, a principal partnership with Lechia Gdansk.