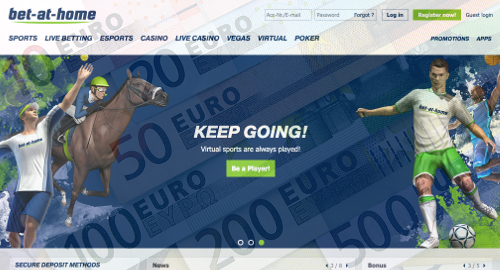 German online betting operator Bet-at-home is sticking with its 2020 financial forecasts despite the significant drop in its first quarter figures.

The company, which is part of the Betclic Everest Group, blamed the declines on the halt of most major European live sports events in mid-March due to the COVID-19 pandemic, which led to customer turnover declining 18% to €677.8m.

The company’s exit from Switzerland’s new regulated online market and ongoing struggles in Poland-facing operations also contributed to the revenue decline, but the “short-term expansion” of eSports betting and “more exotic” traditional sports leagues helped cushion the blow. The online casino vertical “remained nearly unaffected” by the pandemic and its share of overall revenue hit 57.6% in Q1.

There were some positives from the sports vacuum, as the company’s bonus offer outlay was down nearly one-fifth. But Q1 earnings tumbled 29% to €9m, although this represented a €500k improvement from Q4 2019.

Despite the downturn and the uncertain prospects for a resumption of major sports, Bet-at-home’s board of directors opted to maintain its previous projections of FY20 revenue in the range of €120m-€132m and earnings of €23m-€27m, both of which already represented declines from FY19 based on the Swiss/Polish problems.

Bet-at-home said it had yet to enter into any “significant” marketing agreements ahead of this year’s scheduled UEFA European Championship football tournament, and thus the year-long postponement of the event doesn’t leave the company on the hook for any needless marketing outlay during Q2.

The ability for gaming companies to survive the current crisis is a common talking point these days, and Bet-at-home dutifully reported that it had around €55.3m in liquid assets and short-term time deposits. Investors weren’t entirely mollified, as the Frankfurt-listed stock closed out Monday’s trading down 7.3%.