Home / Casino / The Star, Crown both get good news re Sydney casino plans 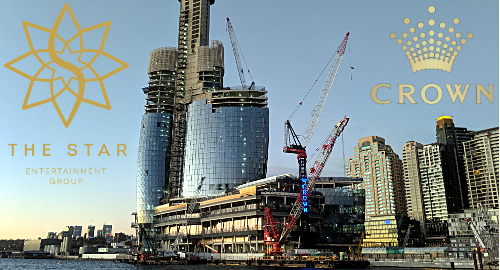 Australian casino operators Crown Resorts and The Star Entertainment Group are both celebrating as their respective Sydney expansion plans got favorable news.

This weekend, local media reported that Crown had reached a confidential settlement with the government of the state of New South Wales that will end a legal challenge of a court ruling that preserved the Crown Sydney casino project’s harbor sightlines.

Last December, the NSW Supreme Court ruled that the NSW government’s Barangaroo Delivery Authority (BDA) had violated the terms of its Sydney development deal with Crown by failing to preserve sightlines across Central Barangaroo from the Harbour Bridge to the Sydney Opera House.

In February, the BDA filed notice of its plans to appeal the ruling, but on July 1 the BDA was absorbed by a new government entity, Infrastructure NSW, which has since decided to abandon this appeal. Crown Sydney, which was designed as a property focusing on high-rolling VIP gamblers, expects to open its doors in early 2021.

Despite this being the first piece of good news Crown has had in weeks, the company opted not to celebrate its victory too hard, saying only that it was “satisfied” with the outcome. That’s probably for the best, as NSW regulators are currently weighing whether to approve the sale of 20% of Crown to Melco Resorts & Entertainment boss Lawrence Ho, following reports that Ho had ties to a company with which Crown was forbidden to associate.

STATE GOV’T HAS THE STAR’S BACK
Meanwhile, the NSW government has also ridden to the rescue of The Star’s Sydney expansion plans. Last month, the NSW Planning Department issued a report saying the company’s plan to add a AU$500m hotel tower to its flagship casino in Sydney’s Pyrmont district was “not in the public interest.”

While the ultimate fate of the hotel tower lay with the NSW Independent Planning Commission, Sydney’s Lord Mayor Clover Moore was pleased by the report, saying it reflected the view of the local community that the tower was ill-advised.

But NSW Premier Gladys Berejiklian has now told the Greater Sydney Commission to conduct a review of Pyrmont’s planning rules to ensure they are “consistent with the government’s vision for its future.” Berejiklian then put her thumb on the scale by claiming that this review “sends a clear signal that our government believes the Pyrmont area has a bright and exciting future as a key part of the NSW visitor economy.”

Moore responded by calling Berejiklian’s intervention “an astounding betrayal of public trust” and warned that it has called into question “the entire credibility of the planning system.”

Last week, The Star’s CEO Matt Bekier said the company hadn’t given up on its Sydney tower plans, the rejection of which Bekier blamed on the company having been “caught up in some dark and murky politics.” Mayor Moore is now likely thinking the exact same thing.

Boyd begins dusting off the tables, machines at 13 casinos
Erik Gibbs
6 hours Ago