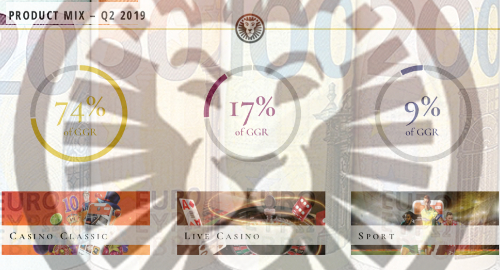 Online gambling operator LeoVegas posted solid growth in the second quarter of 2019 even as it struggles with rising compliance costs in the UK market.

Figures released Wednesday show the Stockholm-listed LeoVegas generated revenue of €94.4m in the three months ending June 30, up 8% from the same period last year and a new quarterly record. However, the company’s earnings were flat at €15m.

Nordic markets accounted for 40% of overall Q2 revenue, up 2% year-on-year. The Rest of Europe claimed a larger share (47%) but grew at a slower pace (1%). The Rest of World accounted for the remaining 13%, thanks to revenue rising by nearly two-thirds.

The company calls itself ‘King of Casino,’ and that’s reflected in its product mix. Nearly three-quarters of its Q2 revenue came from RNG casino products, with another 17% from live casino. Despite having launched a sports betting product three years ago, the vertical remains a minor contributor at just 9%.

LeoVegas said Q2’s organic growth would have risen 26% were in not for ongoing adjustments in the “challenging” UK market. LeoVegas has been on the back foot in the UK ever since the UK Gambling Commission imposed a £600k penalty for social responsibility and marketing failings in May 2018, while local media alleged further shortcomings this spring.

The company has taken steps to ensure future compliance, including the recent launch of its new LeoLine live chat service for problem gamblers, a joint effort with treatment solution providers Gambling Therapy.

Sweden’s new regulated market has presented its own challenges, but LeoVegas says its revenue “developed positively” in each month during Q2. The company claims to be stealing share from rivals, allowing it to become Sweden’s “single largest casino brand.”

LeoVegas has decided not to pursue a new online license in Switzerland’s regulated market and has now withdrawn its products from the country, which contributed €2.2m to LeoVegas’ Q2 revenue. The company hopes to offset this loss through its recent launch in Spain’s regulated market, as well as through expansion into grey/black markets such as Brazil, Chile and Peru.

In personnel developments, Louise Nylén has relinquished her role as deputy CEO, a vacancy that the company doesn’t intend to fill. LeoVegas also announced Dersim Sylwan as its new chief marketing officer. Sylwan will have lots to work with, as the company expects its marketing costs to rise in Q3, after reducing its Q2 spending in Sweden along with affiliate costs and postponing some campaigns from Q2 to Q3.