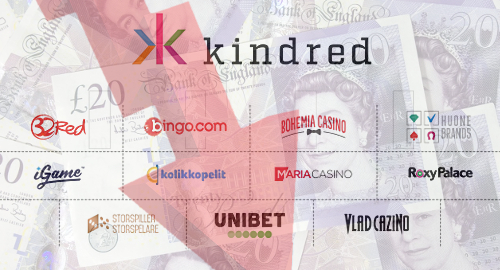 Online gambling operator Kindred Group saw its profits halve in the second quarter of 2019 thanks to Swedish market struggles and the lack of a major football tournament.

On Wednesday, the Stockholm-listed Kindred reported revenue of £226.2m in the three months ending June 30, a modest 3% bump over the same period last year. But earnings fell nearly 27% to £30.5m and after-tax profits fell by more than half to £12.5m.

Kindred CEO Henrik Tjärnström said the company’s bottom line negativity was due to tough comparisons with Q2 2018, which enjoyed a boost from the start of the FIFA World Cup. Earnings from Sweden were off by £9.2m as the company dealt with “significant short-term margin pressure” due to higher taxes and marketing costs in Sweden’s new regulated market.

Kindred’s overall marketing efforts accounted for 29% of the company’s revenue in Q2, the highest level recorded in any Q2 (in any non-major football tournament year) since 2013. Despite these efforts, Kindred’s active customer ranks totaled 1.48m in Q2, down nearly 5% year-on-year and down over 9% from Q1 2019.

A similar phenomenon was evident in the online casino, poker and other games vertical, which nudged up 3% to £117.3m. Western Europe markets gained 12% to £61.7m and Central, Eastern and Southern Europe shot up 28% to £10.4m while Nordics were down 10% to £43.4m. Kindred’s poker revenue continues to defy the doom and gloom surrounding the vertical by rising 15% to £4.6m in Q2.

The quarter saw Kindred launch its Unibet brand in New Jersey through a partnership with Hard Rock Atlantic City. On July 10, Kindred was issued a conditional online casino and sports betting licenses just over the border in Pennsylvania. The company reported £1.6m in lost earnings during Q2 due to its efforts to establish a toehold in the U.S. market.

Since the quarter ended, Kindred says its daily average gross winnings revenue is down 7% from the same period last year.