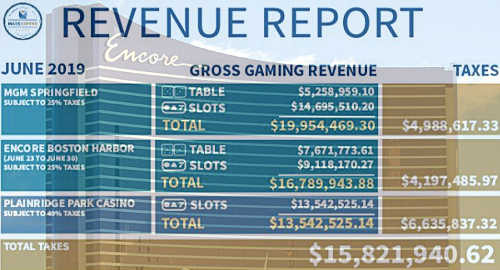 Wynn Resorts’ Encore Boston Harbor casino took in nearly as much revenue in its first week of operations as rival MGM Resorts’ Massachusetts venue took in all last month.

Figures released Monday by the Massachusetts Gaming Commission (MGC) show the state’s three brick-and-mortar gaming licensees generated combined revenue of $50.3m last month. The $2.6b Encore property, which was only open for the final week of June, brought in $16.8m during that span.

That’s only around $3.2m less than MGM Springfield brought in last month, and around $3.2m more than what Penn National Gaming’s slots-only Plainridge Park Casino (PPC) reported. The $4.2m in taxes Encore paid the state brought the total tax take to an unprecedented $15.8m for the month.

Like most Wynn properties, Encore is targeted at a more upscale class of gambler—the initial rate for a standard room was $650 per night—and that unspoken ‘begone, peasants’ policy was reflected in the property’s gaming revenue split.

MGM Springfield has so far proven a disappointment to its owners, who initially predicted first-year revenue of around $416m. Instead, through its first 11 months of operation, the property’s revenue total stands at a mere $232.5m. And MGM’s June revenue was around $2.3m less than the property took in during May, at least in part due to the newer, shinier competition. (Plainridge Park’s June result was down $1.3m from May.)

However much pain Encore might be causing its Massachusetts rivals, the venue doesn’t intend to rest on its laurels. On Monday, Encore announced a partnership with New York’s Saratoga Race Course and the New York Racing Association. The deal will see Encore sponsor the second floor of the all-new 1863 Club at the Saratoga track and offer special deals at Encore for Saratoga fans. Encore will also sponsor two races during the 2019 Saratoga meet.