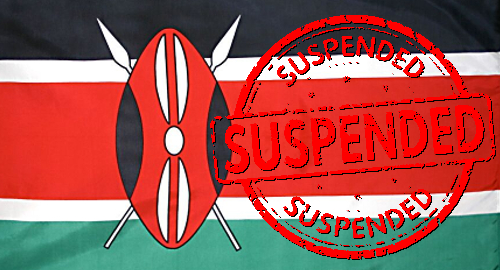 Kenya’s government is making good on its threat to suspend the licenses of gambling operators that fall short of their compliance requirements.

On Monday, Kenyan media reported that the country’s Betting Control and Licensing Board (BCLB) had postponed renewing the operational licenses of 13 casinos, six lotteries and eight sports betting firms. The BCLB also declined to renew the licenses of 19 betting operators pending security vetting of their operations and ownership.

The identities of the targeted operators have yet to be disclosed but the BCLB issued a statement saying it “shall not hesitate to debar non-compliant operators in any category.” The BCLC also announced that all licensees will now face a quarterly review to confirm their compliance with Kenya’s tough new gambling rules.

In May, Kenya unveiled its new Gaming Bill 2019, which includes increased regulatory fees, minimum bet limits and local ownership requirements. The government previously announced that any gambling licensee deemed to have outstanding tax obligations would face suspension of their license as of Monday, July 1.

The Gaming Bill also seeks to effectively prohibit the use of mobile phones for wagering if the wager is placed via the M-Pesa mobile money transfer service – run by leading telecom operator Safaricom – which doesn’t require users to hold a traditional bank account. Operators who permit such mobile wagering would face fines of up to Ksh50m (US$50k) while individual bettors could be fined up to Ksh2m.

The Communications Authority of Kenya will be tasked with monitoring online gambling transactions to ensure compliance with the mobile restrictions, as well as the proposed Ksh50 (50¢) minimum bet limit. Bettors who place wagers below this limit could face a maximum financial penalty of up to Ksh5m along with a possible prison sentence of up to six years.

Last week, Kenya Revenue Authority (KRA) deputy commissioner Maurice Oray said the new policies weren’t intended to “kill” the gambling sector but “to ensure that the government gets a fair share of the revenue that’s transacted on these platforms.” Oray added that the government believed that local betting firms had “largely not effectively contributed to the tax basket.”