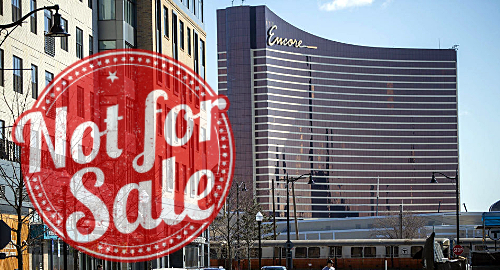 Casino operator Wynn Resorts insists that its brand new Massachusetts resort isn’t for sale, despite the company having been discussing a sale to rival MGM Resorts just two weeks ago.

This week saw the first orientation sessions for the thousands of staff who have been hired to work at Encore Boston Harbor, Wynn’s $2.6b resort casino in the suburb of Everett. The property is scheduled to open to the public on June 23, and some of its restaurants are already taking reservations, so the clock is ticking.

On Tuesday, the Boston Herald quoted Wynn spokesman Michael Weaver saying that CEO Matt Maddox had personally addressed each orientation session and that each crop of trainees had received the same message: “Encore is not for sale.”

Encore’s president Robert Desalvio echoed those comments, telling local media that the company was “done” with any thoughts of dealmaking and Wynn was “very much focused on opening the property.”

The executives’ reassurances came as a relief to both Everett city councillors and Wynn staffers, many of whom had expressed surprise and unease at last month’s news that Wynn was talking to MGM about selling the mega-resort just weeks before its launch date.

Those talks broke off on May 22 after MGM shareholders expressed ‘anxiety’ and local politicians in both Everett and Springfield (where MGM operates its own Massachusetts casino) warned that they would have to be factored into any deal talks.

There was also the small matter of the state’s gaming laws expressly forbidding any company from owning more than one casino license, meaning MGM would have had to ensure it had a buyer for its own casino before taking control of Encore. And local regulators really aren’t in the mood to grant Wynn any favors.

Meanwhile, last weekend saw a graduation ceremony for over 300 students of the Greater Boston Gaming Career Center at Cambridge College. The school, which is partially sponsored by Encore Boston Harbor, offers 9-14 week programs on becoming a casino croupier. Encore casino manager George Megee told the local CBS affiliate that the casino was looking for dealers with “personality” who could “entertain and keep players at the table.” Hopefully longer than Wynn was planning on keeping its name on the joint.