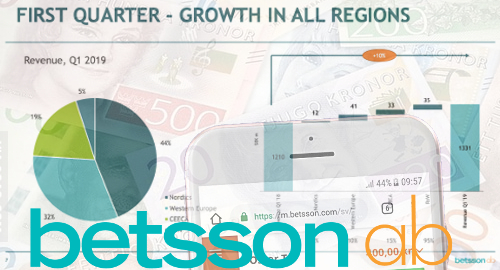 Betsson announced Tuesday that its revenue in the three months ending March 31 totaled SEK1.33b (US$138.7m), up 10% from the same period last year (+8% organic growth), with all geographic markets showing year-on-year growth. Operating income was up 21% to SEK255.2m while net income rose 22% to SEK229.3m.

Sports betting turnover was up 10% to SEK6.35b, while betting revenue grew 13% to SEK297.8m. Mobile channels accounted for 80% of betting revenue, up 11 points year-on-year. Online casino revenue rose 10% to just over SEK1b, with two-thirds of that coming via mobile channels. Active customer ranks improved 13% to nearly 687k.

The Nordic markets remain Betsson’s bread-and-butter, although its SEK580.6m revenue contribution was up only 2% year-on-year (and down 1% organically). Western European markets fared much better, rising 10% to SEK430.8m, while the Central & Eastern Europe and Central Asia segment grew 15% to SEK248.2m.

Betsson CEO Pontus Lindwall noted that the gains came despite the negative impacts of Sweden’s new regulated market, which launched on January 1. Lindwall acknowledged the market had gotten off to a “challenging start” due to customer acquisition resembling a welcome bonus blood-sport but Lindwall maintained that things began to settle down towards the end of the quarter and thus it’s too early to draw any long-term conclusions.

Betsson continues to prepare for the Netherlands’ regulation of its online gambling market, which the company expects will formally launch in Q1 2021. Last month, Betsson rebranded its two main Dutch-facing online casino brands, along with other changes “to be in the best position for a license at the earliest possible date.”

With respect, that’s a pretty major assumption, given the Dutch gambling regulator’s view of Betsson as a ‘rogue’ operator and Betsson’s contrary view that it was well within its rights to serve Dutch customers without Dutch permission. So while the new Dutch market may launch in 2021, Betsson may yet find itself on the outside looking in with the other ‘cowboys’ for a couple years.