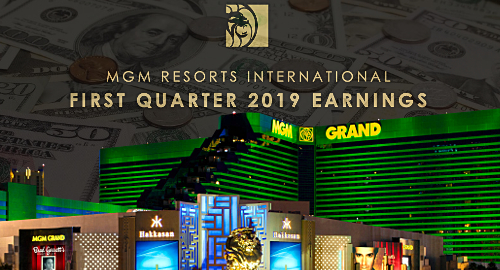 Casino operator MGM Resorts is shedding around 1k staff positions after reporting a significant drop in its first-quarter profits.

On Monday, MGM reported revenue of $3.18b in the three months ending March 31, a 13% improvement from the same period last year. Operating income rose 3% $370.2m but net income plummeted 86% to $31.3m, although the Q1 2018 profit was artificially goosed by US President Trump’s overly generous corporate tax cuts.

MGM’s Las Vegas Strip operations reported flat revenue of $1.4b while adjusted earnings fell 10% to $404m. Strip gaming revenue was down 13% as table games reported declines in both drop and win rate.

MGM’s US regional operations reported revenue up 21% to $804m, while earnings rose nearly one-quarter to $207m. The gains were largely due to the August 2018 launch of MGM Springfield in Massachusetts and this January’s acquisition of New York’s Empire City Casino. The Springfield property contributed revenue of $78m while Empire City added $37m to the total. Absent those new properties, ‘same store’ earnings were up a more modest 9%.

In Macau, MGM’s stake in the MGM China joint venture reported revenue rising 23% to $734m and earnings up 26% to $191m, largely on a full quarter’s contributions from MGM Cotai, which opened in February 2018 and received 25 new-to-market gaming tables on January 1. Mass table revenue was up 35% as win rates improved by three points while VIP gaming revenue inched up 2%.

MGM CEO Jim Murren said the results came in “slightly better than our expectations,” despite weak baccarat performance in Vegas. Murren expressed confidence that the company was on track to realize its goal of $3.6b to $3.9b in adjusted earnings in 2020.

Part of that MGM 2020 Plan involves creating “a more centralized organization to maximize profits,” a goal that involves a significant number of layoffs. MGM first announced its intention to swing the redundancy axe in January and the blood officially began to flow in earnest last week.

On Monday, MGM’s CFO Corey Sanders confirmed that the cuts will eventually leave around 1k current staffers out of a job by the end of June. Sanders insisted that the cuts, which cost the company around $20m in severance payments in Q1, were “vitally important” to MGM achieving its desired reinvention.

The two key growth opportunities on MGM’s radar are securing one of the three Japanese integrated resort licenses – MGM says it is “laser focused” on securing a license in Osaka – as well as sports betting and interactive gaming through its Roar Digital joint venture with GVC Holdings.